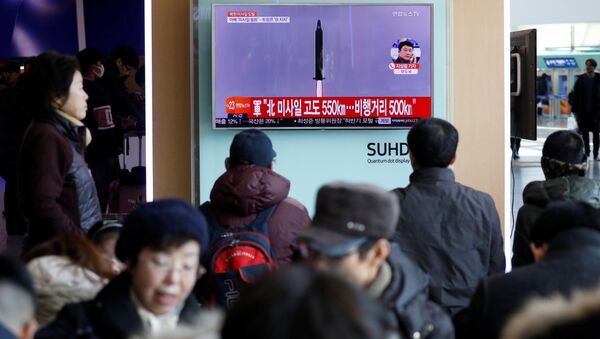 © REUTERS / Kim Hong-Ji
Subscribe
Reaction of different countries on the latest North Korea's missile launch in the direction of the Sea of Japan.

MOSCOW (Sputnik) — North Korea launched a missile in the direction of the Sea of Japan early on Sunday, which led to protests from the country’s closest neighbors, Japan and South Korea, both stating that Pyongyang’s actions were in breach of the UN Security Council resolutions.

The South Korean government is working on appropriate response actions, while the country’s military experts allow for a possibility of the launch having been a test of Washington’s reaction under the new administration.

The missile was launched at 07:55 local time (11:25 GMT) on Sunday from a military airbase in North Korea's North Pyongan Province. According to the South Korean military, the missile flew about 311 miles and fell into the Sea of Japan. Tokyo said that the missile landed outside of Japan's exclusive economic zone, 22 miles east of the North Korean western shore, and did not inflict any damages.

Japanese Defense Minister Tomomi Inada said that Tokyo was collecting the information and closely following the development of the situation. An extraordinary session of Japan's National Security Council was convened after the launch.

Japanese Foreign Minister Fumio Kishida said that the missile launch was a violation of the resolution of UN Security Council and the Japanese authorities were working to ensure that the United Nations sends a powerful message to the North.

The South Korean military experts allow for the possibility that North Korea launched a missile to test the reaction of the United States under the administration of President Donald Trump.

Seoul said it was working on the appropriate response to Pyongyang’s provocations.

"Our government, in tandem with the international community, is doing its best to ensure a corresponding response to punish the North," Korean acting President Hwang Kyo-ahn said, as quoted by the Yonhap news agency.

South Korea Working on Appropriate Response to North’s Missile Test
The US Strategic Command (USSTRATCOM) said that "the launch of a medium- or intermediate-range ballistic missile occurred near the northwestern city of Kusŏng."

According to the North American Aerospace Defense Command (NORAD), the missile did not pose a threat to North America.

According to the White House, the president was briefed and the United States would continue to monitor the situation.

"I just want everybody to understand and fully know that the United States of America stands behind Japan, its great ally, one hundred percent," Trump said in Mar-a-Lago, Palm Beach in Florida, during a joint briefing with Japan’s Prime Minister Shinzo Abe.

Pentagon: North Korean Missile Posed No Threat to US
The United States also pledged to pressure China into swaying North Korea, as it had the biggest influence on Pyongyang in the region.

Konstantin Kosachev, the chair of the Foreign Affairs Committee of the Russian Federation Council, said that North Korea had to comply with the resolution of the UN Security Council, which stipulates that Pyongyang should not carry out any new missile launches or nuclear tests.

The Russian lawmaker added that there were no grounds for adjusting this point of view.