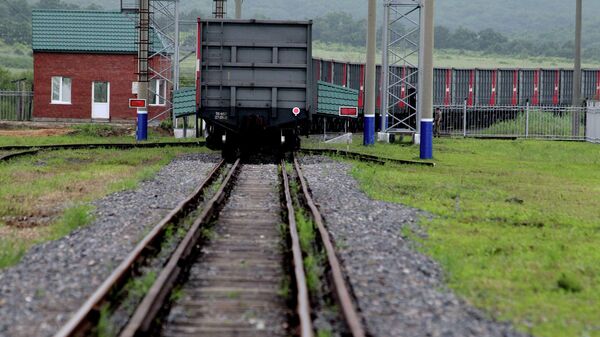 The New Silk Road infrastructure project gives other countries an opportunity to take advantage of China's economic growth at a time of a global economic crisis.

New Silk Road: 'Most Important Economic Project of First Half of 21st Century'
Russian President Vladimir Putin will likely participate in the Silk Road summit that is due to take place in Beijing on May 14-15, Russian Ambassador to China Andrei Denisov said Thursday.

Earlier, the Chinese Foreign Ministry said that the leaders of over 20 countries have already confirmed their participation in the event.

The New Silk Road strategy is part of China’s involvement in global governance and is expected to be a driving force for regional and global economic development, according to Wang Zhimin, an adviser at the Fengmian think-tank and director of the Institute for Globalization and Chinese Modernization.

Putin Expected to Take Part in Silk Road Summit in Beijing in May
The expert stressed that the initiative is especially important for the global community, taking into account the current "uncertainty" in the world economy.

"Since the 2008 economic crisis, the global economy has been in decline. Growth in the United States and Europe was capped at two percent. Despite the downward trend, the Chinese economy managed to keep growing, including 6.7 percent last year. Donald Trump’s victory in the US election and his isolationist policy has added to global economic uncertainty," he told Sputnik Chinese.

Wang noted that taking into account China’s nearly 25 percent to the global economy many countries want to take advantage of the Chinese growing economy.

"Chinese President Xi Jinping has repeatedly said that Beijing welcomes such cooperation. The Silk Road strategy is a result of China’s economic achievements and is the backbone for the global economy at a crisis time," he said.

Russia, China to Build High-Speed Rail Link
The amount of investment by Chinese enterprises into the countries along the route has already exceeded $ 50 billion.

The Northern Route is considered the most promising among the others. It would go through Kazakhstan and Russia. The Sea Route would include transit routes via Kazakhstan as well as ports of the Caspian Sea for transit to Turkey. The Southern Route would bypass Russia via Kyrgyzstan, Uzbekistan, Turkmenistan, Iran and Pakistan with an access to the Indian Ocean.

"Let’s take Kazakhstan as an example. Its economy long relied on oil, but now crude prices are low and the country needs to develop other sectors of its economy. China is ready to provide financial assistance," Wang said.