Why the US-European Relationship is on the Brink 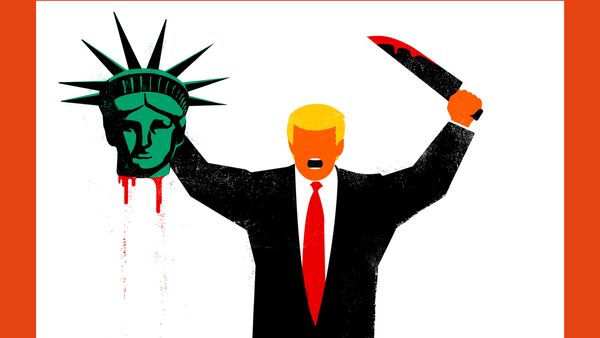 On Friday, Der Spiegel, widely considered to be Germany's most influential news magazine, stunned observers with the cover of its latest issue, featuring President Donald Trump holding a decapitated Lady Liberty, accompanied by the phrase 'America First'. To observers, the image is a perfect illustration of the sorry state of US-European relations.

The provocative cover, featuring the President wielding a bloody knife as the decapitated head of the world-famous American symbol of freedom drips blood, has resulted in heated discussion on social media, and even to a debate about the implicit comparison made between Trump and the Daesh terrorists' habit of chopping off the heads of their enemies.

I don't recall @DerSPIEGEL depicting Muslim terrorists this way, when they actually do behead people. Just the guy who wants to stop them. pic.twitter.com/uxOLAvBmDW

But for others, the Spiegel cartoon is a perfect symbol in what has already become a long and nasty series of tense exchanges between European officials and media and the Trump administration and its American and European supporters.

Trump or Putin? EU Loses Plot on Biggest Threat
In recent weeks, European elites have engaged in a verbal sparring match with the incoming Trump team, with Germany on the front line. Vice Chancellor Sigmar Gabriel, recently promoted to the post of foreign minister, has been the most outspoken, claiming that Trump's inauguration speech came close to using Hitleresque language. Outgoing foreign minister and Merkel government candidate for the German presidency Frank-Walter Steinmeier, meanwhile, penned an editorial where he suggested that Trump's arrival signaled the end of the 20th century world order, and added that the future is now more unpredictable.

Trump and his team have been no slouches in trading barbs. Last month, the President reiterated election campaign-era language when he said that NATO was "obsolete." Trump also complained that Europe doesn't pay enough for its own security, and said that German Chancellor Angela Merkel had made a "catastrophic mistake" with her open-door immigration policy.

Late last week, building on Trump's earlier assessment that the EU was little more than a "vehicle for Germany," Peter Navarro, the head of Trump's new National Trade Council, said that the Euro was "grossly undervalued," and suggested that the currency was really just an "implicit deutsche mark" designed to give Germany a competitive advantage and to "exploit other countries n the EU as well as the US."

US Reputation Hits Record Low in the Eyes of Germans
On Friday, Berlin shot back, with Chancellor Merkel criticizing Washington's plans to cut corporate tax rates and saying that this would result in an economic race to the bottom among the world's advanced economies. Merkel called on EU leaders to unite, making clear that now more than ever, "Europe has its destiny in its own hands," and can no longer rely on the US for support. "The stronger we state clearly how we define our role in the world, the better we can take care of our transatlantic relations," the chancellor added.

RIA Novosti news agency contributor Igor Pshenichnikkov, an advisor to the director of the influential Moscow-based Russian Institute of Strategic Studies (RISS) think tank, believes that European elites' tense attitudes toward Trump are perfectly understandable, given that they lead directly to questions over the future of the EU itself.

"European elites, until recently moving toward their 'bright future' in America's footsteps, distinctly feel that today, a singular question hangs over Europe like the Sword of Damocles: What will happen to the EU?" Pshenichnikkov wrote.

The analyst pointed out that during the US election campaign and since his inauguration, Trump seems to have made it deliberate policy to avoid any mention of the EU. In fact, Pshenichnikkov noted, "as far as the EU is concerned, it seems either to be not at all included in the new president's agenda, or takes a very small place there."

This, Pshenichnikkov noted, means that while "until recently, the relationship between the US and the EU seemed connected by an indivisible bond between the leading powers of the West in both its military and financial-economic foundations, the new President is making it clear that the EU is of no interest to him."

Against All Odds: What's Behind Washington's Softening Stance Toward China
Last month, in an interview for The Times, Trump commented on the UK's Brexit vote by saying that "people, countries want their identity and the UK wanted its own identity…so if you ask me, I believe others will leave." These remarks, according to Pshenichnikkov, have left EU officials nervously pondering the true implications of Trump's words, even as it made it perfectly clear that at a minimum, Washington would no longer support the European super state project.

The political analyst recalled that as expected, newly minted Secretary of State Rex Tillerson is on the same page as Trump as well. "Tillerson hardly speaks about the prospects of cooperation between the US and the EU. He mentions the EU only in the context of sanctions against Russia, and even then, only in the sense that sanctions should not interfere in joint work with Russian enterprises." Otherwise, "he considers Europe [collectively only as a] comfortable market for American energy supplies."

Finally, Pshenichnikkov noted, "it's worth remembering that among Trump's mediators on relations with Russia is former Secretary of State Henry Kissinger. Kissinger is opposed to turning Europe into a region with a powerful status." Moreover, if Niall Ferguson's take on a Kissinger-inspired strategy is correct, Trump may attempt to modify the North American Free Trade Agreement, shaping it instead into a 'North Atlantic Agreement', where Mexico would be excluded and replaced by Britain, "bring[ing] the United Kingdom directly into a post-EU Anglo-Atlantic sphere."

EU Army: If Trump's Plan for NATO Works Out Who Will Pay for Europe's Defense?
NATO, the military component of the structure of the 'collective West', also faces big changes, according to the analyst, given the expected reductions in funding for the alliance from the United States. "This will only accelerate the centrifugal forces in the EU itself. Conversely, as in a chain reaction, the collapse of the EU would certainly result in convulsions in NATO, given that the two are inextricably linked," Pshenichnikkov stressed.

In light of Trump's demands that the Europeans contribute more to paying in to their own defense, Pshenichnikkov suggested that the concept of the European Army is also on the table once again. "On the other hand, if Trump is right, and the EU does fall apart, it definitely won't need common army, either," he added.