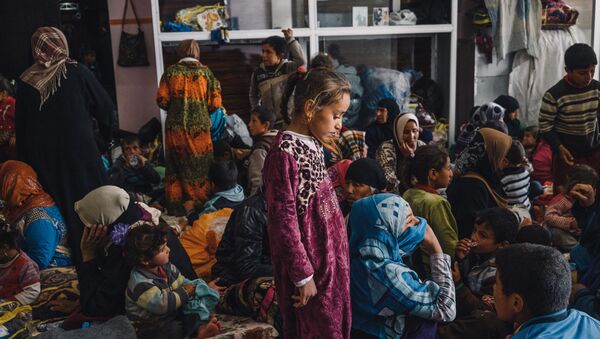 © AP Photo / Alice Martins
Subscribe
The World Food Program (WFP) has had to halve the food rations it gives to 1.4 million displaced Iraqis because payments from its major donor states have been delayed.

"This year somehow we are receiving commitments from donors a little bit late.

US Air Force Pays $200Mln for Base Support, Security at Balad Airbase in Iraq

We are talking with donors but we don't have enough money as of yet," spokesperson for the WFP Inger Marie Vennize told Reuters January 27. "We have had to reduce (the rations) as of this month."

Vennize said the 50% cuts in monthly rations would affect more than 1.4 million people across the country.

The reduction comes as more and more Iraqis are being displaced both by Daesh and by the US-supported push to finally oust the terrorist group from its stronghold in Mosul.

Mosul's estimated 1.5 million residents are currently caught up in vicious urban warfare between Daesh and Iraqi, Kurdish and American forces and Shia militias. Of the 1.4 million people in Iraq who received WFP assistance in November, more than 164,000 were individuals displaced by the battle for Mosul.

The WFP notes that it is also supplying food to families who have chosen not to leave their homes, and is delivering rations to those in need in the suburbs around the city.

"They are giving an entire family the food supply of one person… we want to go back home," Omar Shukri Mahmoud, an Iraqi living in the Hassan Sham camp, told Reuters.

Another woman, Safa Shaker, said the rations wouldn't be enough for her large extended family. "We escaped from [Daesh] in order to have a chance to live and now they have cut the aid. How are we supposed to live?"

The WFP, a UN agency, is talking to its major donors, including the biggest, the United States, but also Germany, Japan and others to scare up funding to bring rations back to their previous levels.

According to the WFP, more than 3.3 million Iraqis are currently internally displaced, largely since Daesh began taking over large areas of the country in 2014, and 2.4 million require immediate food assistance.

On its Iraq Emergency webpage, the WFP notes that it anticipated needing $88 million to deal with the displacement and hunger crisis the Mosul operation would inevitably create. "This will cover the procurement and pre-positioning of stocks to assist 1.4 million people for three months," it said.

At a donor meeting with the United States, Japan, Germany, Canada, the Netherlands and Kuwait in July, almost $1 billion was pledged for stabilization, mine clearance and humanitarian needs, the agency reported.

"Information on how much is for the humanitarian response and how much had already been contributed by governments is not yet available," the WFP said