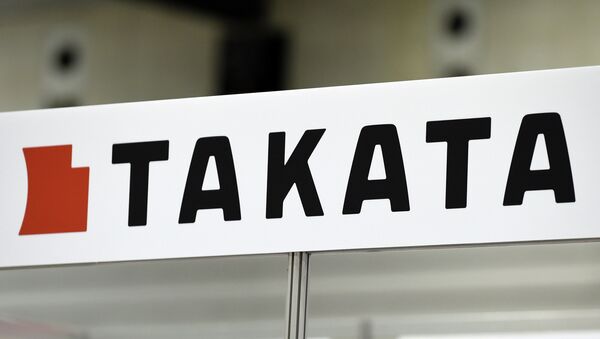 © AFP 2023 / Toru YAMANAKA
Subscribe
International
India
Africa
The recall of cars with defective Takata airbags has been expanded to an additional 543 million cars in the United States, Toyota announced in a press release on Friday.

Science & Tech
Killer Airbags: BMW Recalls 200,000 Cars in China Over Takata Airbag Defects
WASHINGTON (Sputnik) — The recall affects multiple models from 2008 through 2012 from the compact Corolla to the luxury Lexus, the release noted.

"According to Takata, a safety defect may arise in front passenger air bag inflators in the involved vehicles due to inflator propellant degradation occurring after prolonged exposure to high absolute humidity, high temperatures and high temperature cycling," the release stated. "This may result in an inflator rupture when the air bag deploys."

Earlier on Friday, Takata agreed to plead guilty to fraud and pay a $1 billion fine in connection with faulty airbag inflators that are blamed for the deaths of 16 people, according to the US Justice Department.

Takata has recalled as many as 100 million of the defective air bags, which can explode without warning, pummeling passengers with shrapnel.

At least 16 people have been killed worldwide and more than 180 injured as a result of Takata’s air bag explosions. The faulty inflators have touched off the largest automotive recall in US history involving 42 million vehicles and 69 million inflators.