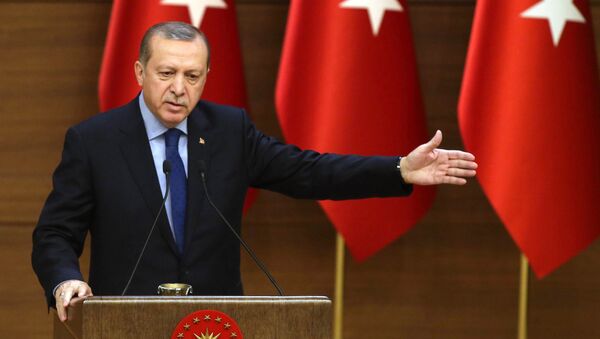 The US's main partner on the ground in Syria continue to be the Syrian Democratic Forces (SDF). They includes the Kurdish YPG militia, which Turkey views as an extension of the PKK militant group, seen as a terrorist group by Ankara.

The PKK has waged a bloody three-decade insurgency in Turkey, trying to force the Turkish government to allow the creation of a separate Kurdish state. It's a proposal which Turkish President Erdogan utterly rejects.

The inclusion of the YPG in the US-backed SDF has therefore been a major point of contention between the US and Turkey.

This was inflamed on Wednesday January 11, when the US Central Command tweeted a statement validating their support for the SDF.

SDF confirms that it has no affiliation or ties to PKK pic.twitter.com/mvENTcBpoQ

Is this a joke or @CENTCOM has lost its senses? Do you believe anyone will buy this? The US must stop trying to legitimize a terrorist group

It seems a significant amount of global diplomacy is now being conducted via Twitter.

US Has No Plans to Designate Kurdish YPG as Terrorist Group

The rift between Turkey and it's NATO ally, the US is growing increasingly frosty. Political analysts note that this widening divide risks undermining their mutual goal-the fight to drive out Daesh from Syria.

The fissure was already widened earlier in the week when on January 10, US State Department deputy spokesman Mark Toner, said that the YPG's political wing, the Democratic Unity Party (PYD), should be allowed to take part in the peace talks on Syria.

"This process has to include all Syrians, and that includes the Syrian Kurds," Toner said.

The statement was rejected by Ankara. No wonder, as since August 2016, Turkey, and the rebels they support, have been fighting the YPG, in addition to Daesh.

On January 7, the Turkish army announced that it had killed 291 YPG fighters.

The Turkish forces next target is Al-Bab. Just 20 miles south of the Turkey-Syria border, it is strategically important to Turkey because Kurdish-dominated militias are also attempting to control it.

Tellingly, the US has declined to offer support for Turkey's Al-bab campaign.

The Turkish government has expressed hope of a "new chapter" of relations with President-elect Donald Trump. However, it's not yet clear whether the new administration intends to continue with or end its support for the YPG.

000000
Popular comments
Turkey has waged a bloody three-decade war of ethnic suppression its Kurdistan colony. And it now views Syrian Kurdistan with appetite as a resource rich asset to the neo-Ottoman dream.
sterndaler
12 January 2017, 18:29 GMT
000000
Newsfeed
0
New firstOld first
loader
LIVE
Заголовок открываемого материала
Access to the chat has been blocked for violating the rules . You will be able to participate again through:∞. If you do not agree with the blocking, please use the feedback form
The discussion is closed. You can participate in the discussion within 24 hours after the publication of the article.
To participate in the discussion
log in or register
loader
Chats
Заголовок открываемого материала
Worldwide
InternationalEnglishEnglishMundoEspañolSpanish
Europe
DeutschlandDeutschGermanFranceFrançaisFrenchΕλλάδαΕλληνικάGreekItaliaItalianoItalianČeská republikaČeštinaCzechPolskaPolskiPolishСрбиjаСрпскиSerbianLatvijaLatviešuLatvianLietuvaLietuviųLithuanianMoldovaMoldoveneascăMoldavianБеларусьБеларускiBelarusian
Transcaucasia
ԱրմենիաՀայերենArmenianАҧсныАҧсышәалаAbkhazХуссар ИрыстонИронауОssetianსაქართველოქართულიGeorgianAzərbaycanАzərbaycancaAzerbaijani
Middle East
Sputnik عربيArabicArabicTürkiyeTürkçeTurkishSputnik ایرانPersianPersianSputnik افغانستانDariDari
Central Asia
ҚазақстанҚазақ тіліKazakhКыргызстанКыргызчаKyrgyzOʻzbekistonЎзбекчаUzbekТоҷикистонТоҷикӣTajik
East & Southeast Asia
Việt NamTiếng ViệtVietnamese日本日本語Japanese俄罗斯卫星通讯社中文（简体）Chinese (simplified)俄罗斯卫星通讯社中文（繁体）Chinese (traditional)
South America
BrasilPortuguêsPortuguese
NewsfeedBreaking
12:51 GMTDozens of New Yorkers Stage Anti-Vaccine Protest at a Food Court Chanting F**k Joe Biden
12:41 GMTFour Inmates Dead, One Injured in Attempted Jailbreak in Philippines, Reports Suggest
12:40 GMTVirginia Giuffre to Reportedly Hand Prince Andrew Secret Doc Able to Defeat Her Lawsuit
12:37 GMTRussia Scrambles Three Su-35 Jets to Escort US B-52 Bomber Approaching Border in Pacific Ocean
12:32 GMTCyclone Gulab Likely to Make Landfall in India on Sunday Evening
12:21 GMTUN Chief Warns 'Humanity Unacceptably Close to Nuclear Annihilation'
12:09 GMTKremlin Says It Hopes for Consistency on Minsk Agreements From Germany After Merkel Leaves
12:02 GMTRussian Presidential Spokesman Says Gazprom Fulfilling All Obligations
11:54 GMTLabour Leader Says It's 'Not Right' to Say Only Women Have a Cervix
11:43 GMT'F**k Them': Carlson Responds to Yet Another Call to Fire Him Over 'Great Replacement' Theory
11:42 GMT'Piece of Scum': UK Labour Deputy Leader Lashes Out at Tories
11:14 GMTUK Transport Minister Calls on Britons to Behave Normally, Says There is No Shortage of Fuel
11:12 GMTHamas Has No Place in Sudan But Will It Give Up on Former 'Base'?
11:05 GMTJapan Should Look Into Having Nuclear Submarines, Candidate for Ruling Party Head Says
11:05 GMTIsraeli Soldiers Shoot Down Nazi Flag Raised Near Outpost in West Bank - Photo, Video
10:52 GMTTaiwan Strait Situation 'Complex and Grim', Xi Jinping Says as He Calls for 'National Reunification'
10:46 GMTHillary Clinton Urges to Call Her 'Madam Chancellor', But Netizens Come Up With Other Names
10:39 GMTGerman Green Party Might Find Some 'Rare Lizards' to Stop Nord Stream 2, AfD Co-Chair Warns
10:35 GMTWorld War II Bomb Suspends Elections at Several Polling Stations in Wuppertal, Germany
09:47 GMTTunisian Lawmaker Says Ennahda Party's Rigidity Led to Mass Resignation of Members