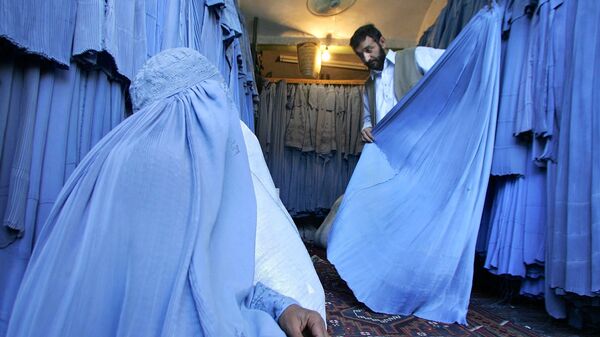 © AFP 2023 / Behrouz Mehri
Subscribe
International
India
Africa
The production, import and sale of burqas in Morocco has been banned. Shopkeepers have just 48 hours to get rid of their stock as the north African country cracks down on the traditional Islamic dress.

No official announcement was made by the Moroccan government but it's reported that officials ordered businesses and clothing outlets across the the country to remove all their stock within a 48 hour time period.

#Morocco is at war with the #burqa. The importation, manufacturing, and selling of burqas is illegal in Morocco now.

The ban applies to burqas which cover the entire face because of security concerns, officials reportedly said.

"We have taken the step of completely banning the import, manufacture and marketing of this garment in all the cities and towns of the kingdom," a ministry official told Le360, Moroccan news site, that suggested "bandits have repeatedly used this garment to perpetrate their crimes."

"The burqa is a part of the Muslim landscape, but only a small part of the whole Muslim world. However, it is not a definitive element of the Maghreb, specifically in Morocco — from a religious or cultural point of view. It's apparent what the message is from those who want to force another kind of ideology on Morocco," Dr. Karim Ifrak, Islamic Studies academic at the French National Center for Scientific Research (CNRS) told Sputnik.

"It is message from the very top, spread directly by various ideological movements that have attached themselves to — among other things — Salafism."

Dear journalists, there's is NO such thing as a Moroccan #burqa. Moroccans rock a djellaba and the older women rock it with a 'tam' #Morocco pic.twitter.com/RUHw7VIhkx

Europe's Suffocating Crisis and the Smuggled Migrant in a Suitcase
On 1 January 2017, more than 1,000 migrants from other countries in Africa attempted to cross Spain's north eastern border with Morocco after 400 people succeeded in breaching the six meter fence in Ceuta in December, heightening security concerns in the country.

The burqa is already banned in public spaces in France and ten other European nations who display varying levels of tolerance towards the full face veil.

It's understood that the recent crackdown on the Islamic dress in Morocco applies only to full-face covering burqas.