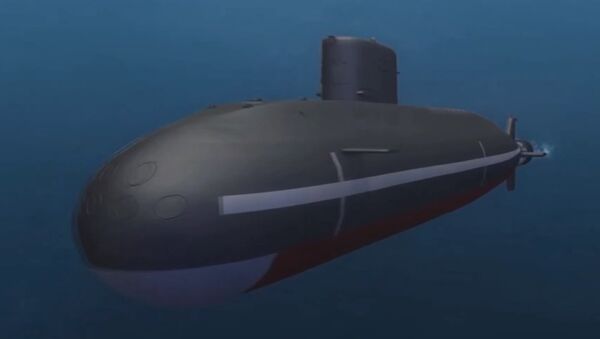 © Photo : Youtube/DefenseNewsX
Subscribe
India is shrugging off concerns raised by some of its neighbors on its preparations to test its most ambitious weapon - the K-4 submarine-launched long range ballistic missile (SLBM). The DRDO claims a range of 3,500 km, less than half of China’s JL 2 SLBM.

New Delhi (Sputnik) — India's state-owned Defense Research and Development Organization (DRDO) is currently preparing an undersea platform in the Bay of Bengal for the trial of its long-range ballistic missile.

India Successfully Tests Nuclear Capable Ballistic Missile Agni-V - Ministry
The test, code-named K-4, would be conducted anytime. The 12-meter solid rocket propellant SLBM can carry a warhead, conventional as well as nuclear, weighing up to 2,000 kg. India had tested K 4 three times earlier of a range up to 3,000 km.

Government sources told Sputnik that the range this time will be higher. It is being widely speculated that the indigenously developed submarine INS Arihant would be used for the test as it is capable of carrying 12 K-5 Sagarika missiles and 4 K-4 SLBMs.

Currently, K 4 is undergoing technical trials followed by development trials in 2018. Chinese JL 2 SLBM can hit a target up to a range of 8,000 km while Pakistan claims a tanger of 700 Kms for its SLBM Babur Hatf 7. Apart from China, SLBMs are in the possession of Russia, USA, France, and UK.

The scheduled test of K 4 comes only a short while after the much-hyped back-to-back tests of Agni IV and V in December 2016. China had criticized the tests for violating UN limits on the development of nuclear weapons and long — range ballistic missile. However, experts argue that India should enhance the range of K series missile.

"The K-4 is undergoing technical trials as of 2016. At its maximum range, it could reach some high-value targets in Pakistan from a standoff distance in the Bay of Bengal. It would, however, still fall short of high-value targets on the Chinese mainland or the SSBNs would have to patrol very close to the coastline. With these targets in mind, India will inevitably have to develop an SLBM with a range of 5,000 km," says Brigadier Gurmeet Kanwal, defense expert at Vivekanand International Foundation.

Brig Kanwal wanted India to close the missile-technology gap with both China and Pakistan as early as possible to enhance the credibility of India’s nuclear deterrence.

The Chinese state media Global Times has warned New Delhi that if its long-range missile development continues, Beijing would help Pakistan, an "all-weather friend," acquire similar capabilities. However, India said the tests were not aimed at intimidating particular country.