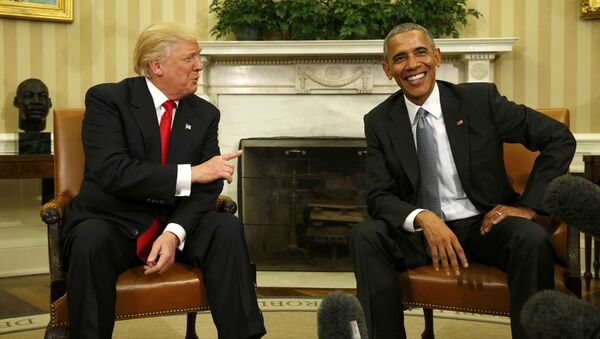 President Barack Obama’s new sanctions against Russia and the expulsion of 35 Russian diplomats are vindictive and partisan measures aimed at sabotaging the foreign policy of his successor Donald Trump, analysts told Sputnik.

WASHINGTON (Sputnik) — Obama announced the measures, including targeted sanctions against Russian individuals and entities on Thursday, claiming they were retaliation for Russian involvement in trying to influence the outcome of the November US presidential election.

The Federal Bureau of Investigation (FBI) and Department of Homeland Security (DHS) released a five-page Joint Analysis Report on Thursday that supposedly provides details to support allegations of Russian civilian and intelligence services interfering in the election.

However, the report contains a disclaimer for being presented "as is," also stating the DHS does not provide warranties of any kind about the presented information.

"Taking such actions just weeks before leaving office is uncalled for and inappropriate," Executive Intelligence Review senior editor Jeff Steinberg said on Thursday. "This was an effort to undermine Trump's intentions to re-normalize relations with Russia, and it was flagrant and partisan, and based on a [CIA Director] John Brennan manipulation of intelligence for vindictive purposes."

Steinberg also noted that the National Security Agency (NSA), which monitors all electronic communications, had so far refused to provide any documentation or support for Obama administration’s allegations.

"NSA has been silent. Knowledgeable sources have said the alleged hacking by Russian spies was actually leaking by Democratic Party insiders furious with the DNC partisanship for Hillary and Hillary's incompetent campaign," Steinberg said.

Obama's Anti-Russia Sanctions Aimed to 'Make Sure Trump Won't Back Off Easily'
Steinberg also recalled that former UK ambassador Craig Murray and WikiLeaks founder Julian Assange have said explicitly that the documents came from inside the United States via leaks on thumb drive downloads of the emails.

"So this is a typical Obama play to assert that he will continue to dictate the terms of presidential policies right up to the last moment and even beyond… but the public appearance is that Obama took on [Russian President Vladimir] Putin like a real cowboy," Steinberg added.

Steinberg predicted that neither Trump nor Putin would be adversely influenced by Obama’s "childish" actions.

"For one thing, Putin is too smart to be fooled by this Obama exit tantrum, and Trump is not about to be cornered by Obama's anti-Putin antics," Steinberg claimed.

"The report as presented is laughably thin as well as quite non-committal," Cobban said. "[The report is] padded out with pathetic, meaningless infographics such as a fifth grader might insert to bulk up a sub-par term paper."

The New York Times in a report on Thursday acknowledged that the FBI-DHS fell short of anything that would directly tie senior officers of Russian military intelligence or the Federal Security Service to any plan or efforts to influence the US presidential election on November 8.