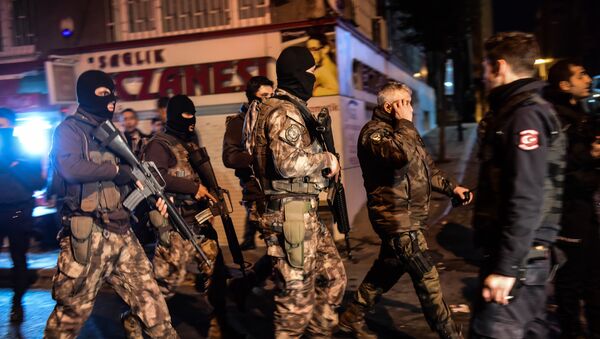 Erdogan: EU Would Reinstate Death Penalty if Faced Similar Terrorism as Turkey
In an interview with Sputnik Turkey, Sencer Ayata, a member of the country's main opposition Republican People's Party (CHP), claimed that Turkish society now has to deal with the psychological trauma caused by political instability, the increased threat of terrorism and the country's ongoing economic crisis.

"The total tension in the country, sharp polarization and constant upheavals caused by terrorist attacks have resulted in Turkish society shrinking into itself and fearing the future," according to Ayata.

"This affects every sphere, adding to a decrease in economic performance and investment volumes.  It even damages indicators of consumption of goods and services that have traditionally been at a high level in Turkey. Such an atmosphere of general insecurity and mistrust led to more people in Turkey using antidepressants," he said.

He stressed that to resolve the crisis in society, Turkey's "ruling party should put an end to the policy of polarization and the rhetoric of dissociation of the population currently used by the authorities."

"The ruling party's main task is to pave the way for a consensus between various strata of society, not to deepen the contradictions between them," Ayata pointed out.

He said that "only a consolidated society has the potential to effectively address the whole array of external threats in the region that Turkey is now facing."

"Our party is ready to do its best to the fight against terrorism. The only condition on which we, as representatives of the CHP, insist is that this struggle be conducted according to the rule of law," he emphasized.

Late last week, the Turkish Interior Ministry announced that Turkey is investigating 10,000 social media users suspected of supporting terrorism online and has arrested more than 1,000 of them.

The crackdown, which comes amid ongoing purges of those suspected of supporting this summer's coup attempt, is causing concern among rights groups and their allies. The country has formally arrested 1,656 people for supporting terrorist organizations or insulting officials via social media, the ministry stated in the same announcement.

Turkey to Remain Prime Target for Terrorists in Foreseeable Future - Report
After the failed coup attempt in July, Turkey declared a state of emergency. Since then, 100,000 people have been fired or suspended from their jobs, and the investigations continue. Despite international alarm, Ankara has said the measures are necessary, given the threat it faces from Islamic terrorist groups and Kurdish militias.

December has been a tragic month for the country, as terrorists have targeted police and soldiers using car bomb attacks in Istanbul and Kayseri, which killed 44 people and 14 people, respectively.