'I Don't Feel Safe': Security (Not) Tightened Up At X-Mas Markets Across France 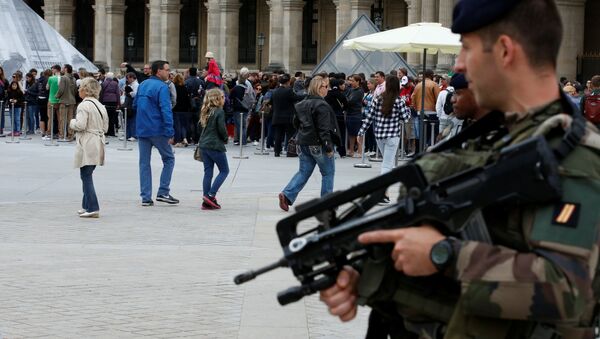 © REUTERS / Philippe Wojazer
Subscribe
As Germany is mourning the victims of the Monday night terrorist attack on a Christmas fair in Berlin, the French Interior Minister ordered to tighten security at Christmas markets across the nation. In an interview with Sputnik, Anthony Caillé, general secretary of CGT Police de Paris trade union federation, said that the measure was not enough.

“National police and the entire security system are unable to make up for what the government is doing abroad, for example in Syria or Iraq. Today we have almost reached the limit of what can be done in our major cities,” Anthony Caillé told Sputnik France.

A Sputnik France correspondent went to a market on Champs-Élysées, the biggest in Paris. Judging from the photographs she made there, an aluminum fence is the only thing that separates the market from the heavy traffic moving up and down the avenue just a meter away.

that the government was doing enough to ensure the security of its citizens.

“Well, maybe I have, but there is nothing I can do about it if I want to go out and have a good time,” a Parisian woman said.

“We won’t lock ourselves in because someone staged a terror attack yesterday. I don’t feel scared, really, especially with all these security measures,” she added.

“Do I feel scared? No, but I keep thinking about it. Life goes on, but we must keep our eyes open. We shouldn’t show them we are afraid. We look around us, but we are not scared,” said another.

When asked if Christmas markets in Paris had become safer places since Monday’s terrorist attack in Berlin, one market-goer said that security had been tight all along.

​“There are many security guards and even more police officers around here, uniformed and plainclothes and this makes me feel safe.”
Others were less optimistic though.

“Police are doing whatever they possibly can, but they can’t be everywhere. If you ask me, I don’t feel safe with this government, that’s for sure,” a man said.

“You see policemen and all these armed people and concrete blocks being set up everywhere, but there is no way you can stop someone who decides to come here and blow himself up,” a third man joined in.

On Monday, a truck ploughed into a crowd at a Berlin Christmas market on Breitscheidplatz square, killing 12 people and injuring 49.

Anis Amri, a Tunisian national and the chief suspect in the deadly attack in Berlin was shot and killed by Italian police outside Milan early on Friday, media reports said.

Interior Minister Marco Minniti told reporters that the man killed in a shootout with police was “without a shadow of doubt” the attacker, Anis Amri.

He said the German authorities were informed.

000000
Popular comments
“Police are doing whatever they possibly can, but they can’t be everywhere. If you ask me, I don’t feel safe with this government, that’s for sure,” a man said. --- Sputnik is under so much scrutiny from its enemies. It needs to stop with the inaccurate headlines. The guy said he didn't feel safe with the Hollande government. He didn't say the situation was hopeless. Sputnik just doesn't like that he meant they are not safe with so many Muslims living there. That's what he meant.
jas
23 December 2016, 16:17 GMT
000000
Newsfeed
0
New firstOld first
loader
LIVE
Заголовок открываемого материала
Access to the chat has been blocked for violating the rules . You will be able to participate again through:∞. If you do not agree with the blocking, please use the feedback form
The discussion is closed. You can participate in the discussion within 24 hours after the publication of the article.
To participate in the discussion
log in or register
loader
Chats
Заголовок открываемого материала
Worldwide
InternationalEnglishEnglishMundoEspañolSpanish
Europe
DeutschlandDeutschGermanFranceFrançaisFrenchΕλλάδαΕλληνικάGreekItaliaItalianoItalianČeská republikaČeštinaCzechPolskaPolskiPolishСрбиjаСрпскиSerbianLatvijaLatviešuLatvianLietuvaLietuviųLithuanianMoldovaMoldoveneascăMoldavianБеларусьБеларускiBelarusian
Transcaucasia
ԱրմենիաՀայերենArmenianАҧсныАҧсышәалаAbkhazХуссар ИрыстонИронауОssetianსაქართველოქართულიGeorgianAzərbaycanАzərbaycancaAzerbaijani
Middle East
Sputnik عربيArabicArabicTürkiyeTürkçeTurkishSputnik ایرانPersianPersianSputnik افغانستانDariDari
Central Asia
ҚазақстанҚазақ тіліKazakhКыргызстанКыргызчаKyrgyzOʻzbekistonЎзбекчаUzbekТоҷикистонТоҷикӣTajik
East & Southeast Asia
Việt NamTiếng ViệtVietnamese日本日本語Japanese中国中文Chinese
South America
BrasilPortuguêsPortuguese
NewsfeedBreaking
00:46 GMTUS House Committee Advances Resolution Calling for Criminal Contempt Charge Against Bannon
00:19 GMTBiden Admin. Not Seeking to Make States Choose Between Working With US or China, Blinken Says
YesterdayCENTCOM Chief, UAE Defense Brass Talk Keeping Pressure on Daesh in Iraq, Syria
YesterdayPhotographer Claims He Filmed Aliens Neutralizing Nuclear Missile Mid-Air - Report
YesterdayUS Senate Panel Advances Bill to Impose Sanctions Tied to South China Sea Issues
YesterdayOver Three-Fourths of US Republicans Want Trump to Run for President in 2024 - Poll
YesterdayBrazil's Senate Accuses Bolsonaro of Mass Homicide as Herd Immunity Policy Fails - Reports
YesterdayItalian Senate Bans Parliamentarians From Working Without Green Pass
YesterdayMalaysia’s Transgender Tycoon Nur Sajat Granted Asylum in Australia From Blasphemy Charges
YesterdayBomb Threat at US Department of Labor in DC Cleared by Federal Police
YesterdayUS Indicts Congressman for Concealing Facts, Making False Statements
YesterdayUS Stocks Extend Rally as Third Quarter Earnings Sparkle, S&P 500 Near Record High
Yesterday‘We Really Need a Wake-Up Call,’ Rep. Gallagher Says on China’s Defense Advancements
YesterdayFBI Seen Taking Out Boxes From NYC House Allegedly Linked to Russian Billionaire Deripaska
YesterdayTed Cruz Says Biden's Cages for Migrants 'Bigger', 'More Full' Than Ever While No Democrat 'Cares'
YesterdayColin Powell, Moral Weakling
YesterdayAustralian Intelligence Chief Says Espionage Soon to Overtake Terrorism Threat
YesterdaySpain's Prado Museum Reeling From Unprecedented Protest by Victims of Mass Poisoning
YesterdayErdogan's UN Criticism Meant for Home Consumption But Others Will Listen
YesterdaySouthwest Drops Plan to Put Unvaccinated Staff on Unpaid Leave in December