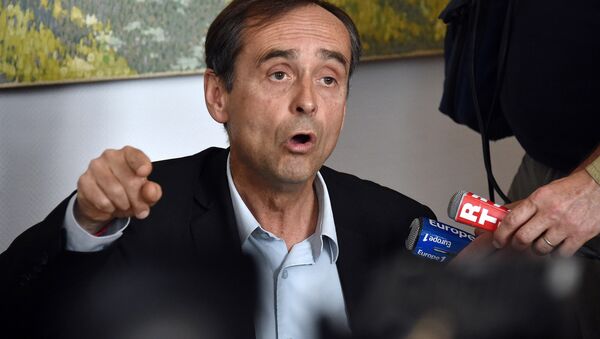 © AFP 2021 / PASCAL GUYOT
Subscribe
A French mayor is to be tried on hate speech charges, following comments he made suggesting the number of Muslims in his town was a "problem."

Robert Menard, an independent mayor of the southern French town Beziers endorsed by Marine Le Pen's Front National, will be tried in March 2017 in Paris for incitement to hatred or discrimination, it has been reported.

He made the comments in September 2016 in an interview with French news channel LCI:

"In a class in the city center in my town, 91 percent of the children are Muslims. Obviously, this is a problem. There are limits to tolerance."

Also in September, he posted a since deleted tweet alleging a "great replacement" was underway in France, invoking a term minted by xenophobic writer Renaud Camus to suggest the country's indigenous population was being supplanted by foreign-born Muslims.

Former director of French @RSF_inter Robert Menard tried for hate speech. "Too many Muslim children in [his] town"https://t.co/4T7GUQKNDt pic.twitter.com/9K8xxo974M

​Menard had previously used the phrase in reference to the election of Sadiq Khan as London Mayor in May, when he tweeted:

Menard has publicly rejected the charges, telling the Associated Press he was not making a discriminatory "value judgment," but expressing "fact."

"I just described the situation in my town. It's what I can see," he added.

In October, Menard again caused controversy by erecting anti-migrant posters in Beziers, which depicted a crowd of migrants stood by Beziers' cathedral, under the headline "That's It, They're Coming", as part of a campaign calling for a local referendum on the arrival of asylum seekers.

In May 2015, Menard violated French law by attempting to record the religion of schoolchildren in Beziers, claiming 64.9% were Muslim based on their first names. In September, he visited a refugee complex to inform the inhabitants they were not welcome in France, and two months later he declared he would not allow any more kebab parlors to be opened in Béziers. 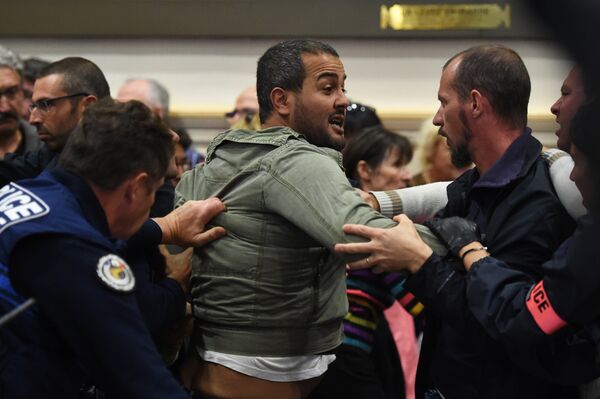 A protester is restrained by policemen after having interrupted the municipal council in Beziers, southern France, on October 18, 2016, as he demonstrates with other people against the local referendum on the welcoming of migrants to the city planned to take place at the end of the meeting
© AFP 2021 / SYLVAIN THOMAS

In 1985, Menard created Reporters sans Frontieres, which he proceeded to head for 23 years. He was arrested for attempting to disrupt the lighting of the Olympic Flame prior to the 2008 Summer Olympic Games. The disruption was aimed at protesting the crackdown on Tibetan civil rights activities by the Government of the People's Republic of China. The group has distanced itself from Menard since he departed in 2008.

He subsequently became director-general of the Doha Center for Media Freedom in Qatar. He resigned as director-general of the Center after less than a year in the post in June 2009, complaining of obstruction by Qatar government officials of the Center's work (notably its criticism of Qatar's restrictive media policies, along with the Center's efforts to bring several persecuted journalists to Qatar for temporary refuge).