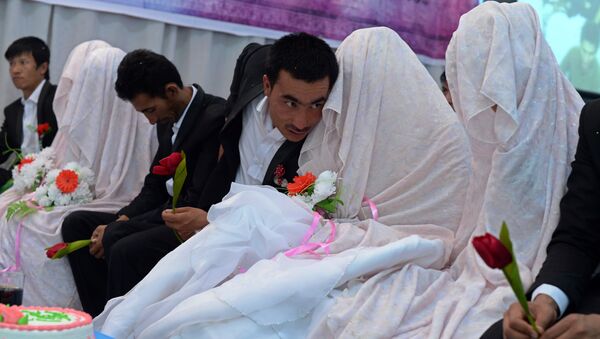 © AFP 2021 / WAKIL KOHSAR
Subscribe
People living in the Afghan provinces of Khost and Paktia are seeing their civil rights systematically violated by local authorities, despite the presence of US military bases there, Paktia-based human rights activist Khanwali Adil told Sputnik.

In an interview with Sputnik Dari, Khanwali Adil said that the list of violations included official permission to marry underage girls and a failure to guarantee their access to secondary education.

“We are trying to make sure that the rights of teenagers are honored unlike the situation experienced under the Taliban! Young girls under 18 must not be married off, they must go to school. Our efforts are fully supported by President Ashraf Ghani,” Khanwali Adil said.

He added that they had set up a broad-based commission of local officials, clerics and public activists to investigate violations of the rights of teenage girls.

“The commission in Paktia should serve an example for all other Afghan provinces,” Adil emphasized.

Germany Disturbed by Refugee Child Marriages
Khanwali Adil gained national and international prominence earlier this year when he set up a tent outside the government headquarters in Kabul and went on a hunger strike demanding a ban on child marriages.

As a result, the country’s leading Muslim clerics issued a fatwa – a religious ruling that outlawed such marriages across the country.

Khanwali Adil had earlier been prosecuted, jailed and even tortured for his human rights activity, but nowadays he and his supporters are free to go ahead with their campaign as a result of a deal struck between local rights organizations, police and security forces.

“So far no one has been punished for forcing teenage girls into marriages. Small wonder, since no amendments have yet been made to our marriage laws,” Adil complained.

A regional command of the International Security Assistance Force (ISAF), tasked with ensuring security and stability in Afghanistan, has been deployed in Khost Province since the ouster of the Taliban by US-led forces in 2001.

000000
Popular comments
They are only there to protect the ever trowing poppy fields for Israel's drug trafficking, through Iran, to Russia and, ultimately, to that entire continent.
marcanhalt
17 December 2016, 11:56 GMT1
000000
Legalized paedophilia and sex slavery, that is so disgusting and a deeply rooted "tradition" too since it´s even common practice in Turkey who are supposed to be more "moderate"...