Trump to Meet With Big Tech CEOs this Week 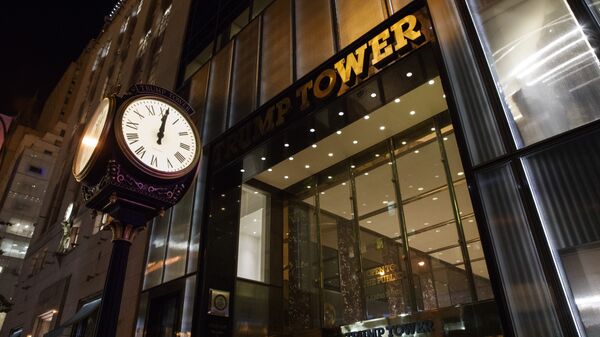 © AP Photo / Evan Vucci
Subscribe
International
India
Africa
President-elect Donald Trump will meet with a number of CEOs from America’s largest tech companies next week and the media is getting excited about who’s invited.

Intel Community Worries Trump Won't Believe Them; Others Wonder Why Anyone Would
Trump has issued invitations to several top executives of major US tech companies, according to media reports. As the topic of the meeting, which is scheduled to happen in Trump Tower in Manhattan next week, remains undisclosed, the media are talking about who is invited.

This list is likely not full, because many invitations went out late this week, according to Recode.

Interestingly, even some of the Trump's critics, like Amazon CEO and founder Jeff Bezos, were invited and are likely to attend. Amazon owns the Washington Post, a media outlet that was quite aggressive towards Trump during the campaign. Bezos's presence at the meeting could make things interesting.

World
Facebook CEO Mark Zuckerberg Talks Tech, AI and Health Research at APEC Summit
Those left off the invite list include Netflix CEO Reed Hastings, Salesforce CEO Marc Benioff, Slack CEO Stewart Butterfield and Dropbox CEO Drew Houston. Uber CEO Travis Kalanick and Airbnb CEO Brian Chesky were invited but are now out of the country, which might be an excuse not to attend, according to media.

Unlike Bezos, Hewlett-Packard CEO Meg Whitman, who compared Trump to Hitler and Mussolini and called him a "dishonest demagogue," will not be present at the meeting.

Interestingly, CEO and inventor of Twitter Jack Dorsey reportedly was not invited, though Twitter seems to be Trump's favourite method of mass communication. His direct comments via Twitter, previously seen as dangerous, now appear to have been a credit to his campaign, especially given the almost complete media support for for Democratic nominee Hillary Clinton by the mainstream media.

While the exact topic of the meeting is undisclosed, the media speculate that Trump is going to try to convince tech companies to return their manufacturing operations to the United States, and that the tech giants will ask for tax breaks. It could be that the meeting will be the first step in what is almost certain to be a long, difficult battle to bring the hands-on work of some of America's most successful and innovative industries back home.

Claim That US Election Could Be Hacked Just 'Headline-Grabbing Media Invention'
Earlier in November, Trump organized a somewhat similar meeting that gathered major US media figures. While the attendees were under the impression that the media's access to Trump was to be discussed, instead they "got an earful from Trump."

This has been denied by Kellyanne Conway, Trump's senior adviser who ran his presidential campaign.

"No, that's not true at all. I sat right to his left. He did not explode in anger," she said. "He's the president-elect. He won… winning solves a lot of problems. Winning makes a lot of statements."

Other media figures criticized those who attended the meeting for violating basic tenets of journalism.