The Rules of the (Trump) Game 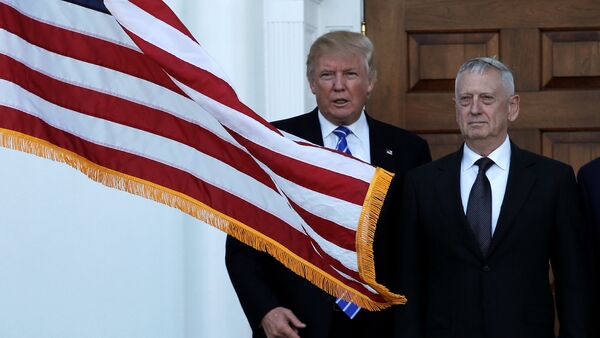 Pepe Escobar
All materials
Gen. James "Mad Dog" Mattis, chosen by President-elect Donald Trump to be the new head of the Pentagon, is a model functionary of the Empire of Chaos.

His call sign is – what else – "chaos". The Marine Corps Special Operations Command (MARSOC) even shared his regular accolade; "Saint Mattis of Quantico, Patron Saint of Chaos". The Saint in his pop incarnation comes fully equipped with a grenade and a knife.

'Mad Dog' on US Defense: What You Need to Know About US' Next Top Military Man
Mad Dog may indeed be seen by the real world as, well, a mad dog; he was on the front line of the 2001 assault on Afghanistan; led the Marine assault on Baghdad during Shock and Awe in 2003; and masterminded the horrendous American destruction of Fallujah in late 2004. Widely hailed as a fine strategist, he retired as chief of CENTCOM in 2013.

The Saint may have been a purveyor of chaos across the Cheney regime-coined "Greater Middle East" – something that came with inevitable collateral damage; his creeping Iranophobia. Yet the key to his appointment is that it will focus on rebuilding the US military.

William Hartung, at the Center for International Policy, A Pentagon Rising: Is a Trump Presidency Good News for the Military-Industrial Complex? notes how "Pentagon spending is one of the worst possible ways of creating jobs. Much of the money goes to service contractors, arms industry executives, and defense consultants (also known as 'Beltway bandits')." Moreover, "such spending is the definition of an economic dead end."

Criticizing Trumponomics as "Reaganomics on steroids" – and that includes vast military spending – Hartung stresses that if Donald Trump really wants to create jobs, "he should obviously pursue infrastructure investment rather than dumping vast sums into weapons the country doesn't actually need at prices it can't afford."

To rebuild the appalling US infrastructure is one of the top Trump campaign promises.

My aim with this column was to launch a debate on the possible Leninist role of White House strategist Steve Bannon. Trump, like all US presidents, is obviously no Leninist. But his chief strategist does cultivate the Leninist notion of a proletariat vanguard; call it the Angry Older White American Blue Collar Male contingent; call it haters of identity liberalism, which elevated selected minorities to the status of sacred victims; or call it simply "deplorables".

US Senate Minority Leader Calls on Trump to Fire Steve Bannon
It's this proletariat vanguard that Bannon aims to cultivate, so they lead/influence/shape policy for the foreseeable US political future, winning election after election for Republicans. They must imperatively benefit from Trump's spun-to-death fight against neoliberal "free" trade, although it's not clear exactly how he will privilege "in-sourcing" and not outsourcing – which is official US corporate policy. They certainly won't benefit from a massive rebuilding of the Pentagon.

German political analyst Peter Spengler introduces a further spanner in the works, noting how Bannon, "like all scholars (or students for that matter) of Russia/Bolshevism has ignored what Kurt Riezler could have and (would want to) unearth to them in his time in exile in New York: first-hand experience and knowledge about the continuum of subterraneous and subversive 'diplomacy' between Germany and Russia" in the run-up towards the October Revolution.

Bets are still off on what "subversive" diplomacy the Trump era will entail – apart from a 21st century remix of the Kissinger-orchestrated "Nixon in China" moment. That would take the form of a "Trump in Russia-China" moment – as in Washington starting to normalize the treatment of those nations the Pentagon ranks as its top two "existential threats", global projection and spheres of influence included.

That contentious phone call to Trump "initiated" by Taiwan President Tsai Ing-wen certainly didn't contribute to any normalization. And no one should expect that the Brzezinski-conceptualized US global primacy, especially over Eurasia – as in "prevent the emergence of peer competitors" — will simply fade away.

William Engdahl argues that the Brave New (Trump) World is all an elaborate deception. A quick look at the lucky few chosen for Trump's plutocrat cabinet does not exactly match the Better Angels of our Nature.

A New York business source, familiar with the Masters of the Universe, who actively supported the Trump program and called his election at least two weeks before the fact, offers a blunt assessment:

"Donald is an insider. Most of the advisors Engdahl refers to are wallpaper. There are three important things to consider. 1) The Supreme Court will have conservative judges. 2) There will be a rapprochement with Russia. The tilt may not be as warm to China, but we will work on that. 3) None of the Masters care about Lenin, or Thomas Cromwell, or ideologies. They care about power and money."

Trumpquake
As for a possible Leninist White House, "if we want to quote Lenin, it is that truth is whatever advances the class struggle. Truth to the Masters is whatever advances their agenda. If they want the Federal Reserve to expand credit, then they look for a liberal if that works, or a conservative, or monetarist, or Keynesian, etc. One of them will support expansion of credit and those that don't will be shunted aside. They don't care about Milton Friedman, Keynes, Marx or Lenin. It is what works for them that counts. Hillary did not work so she is out. And Bannon will do what he is told like the rest of them. And if he gets in the way, he will be fired."

So no matter what California screams and shouts, this is the stark way the Masters will be running Trumpland.

Which brings us, once again, to the rebuilding of the US military. Another business/investment source, who also actively supported the Trump economic plan during the campaign, stresses how "the present power of the Russian military industrial complex is greater than the US in many senses. And all of it is in Russia whereas most of that of the US is farmed out to Asia."

Thus, "it is fortunate that Trump has come in as President to wind down this mad house that they call Washington. There is a consensus above the President that action must be done to rebuild the United States military on an emergency basis." And that will be the Mad Dog's top brief.

The source adds: "One easy way of repatriating all this industry at once is to set all defense contracts up with the stipulation that the entire plane, missile or tank must be made in the United States, thus requiring the massive repatriation of jobs and factories. That should be the first order of business at the White House under Trump as it does not require a tariff, or ending currency rigging."

Meanwhile, there's got to be some careful management of what the disgruntled neocon/neoliberalcon galaxy called the Trump-Putin "bromance".

Brzezinski Vision to Lure Soviets into ‘Afghan Trap’ Is Orlando’s Nightmare
Trump will most certainly re-normalize Russia and work alongside Russia to smash the Salafi-jihadi dementia in Syria; the problem is to what degree Russia and China will be able to influence Trumpland not to turn Iran into high collateral damage. Russia-China-Iran is the key alliance invested in Eurasia integration.

"Grand Chessboard" Brzezinski cannot help himself from expounding the usual narcissistic absurdities, as in suggesting the US helps Russia to "transit effectively" and become a "constructive, significant member of the global community" (it's rather Moscow that may end up doing exactly that to Trump's America).

At the same time, it's no wonder even Brzezinski himself is now spinning, "America is needed to pull together some larger coalition that can deal with global problems. And in that larger coalition America, China and changing Russia could be preeminent."

"Changing" Russia in this case is code for a Russia that can be seduced, tamed and driven away from China. The key context; the Russia-China strategic partnership essentially points towards Eurasia as a vast, integrated emporium – the blending of China's One Belt, One Road (OBOR) with Russia's Eurasia Economic Union (EEU).

Brzezinski, reflecting and/or influencing neoliberalcon "values", would rather reenact Divide and Rule and try to split Russia from China – while at the same time suggesting that Trump can't afford to be left out of the massive (Eurasia) action; there's gotta be some sort of deal. Stay tuned for the terms of a possible upgrade; from Yalta in 1945 to… a Yalta remix in 2017?