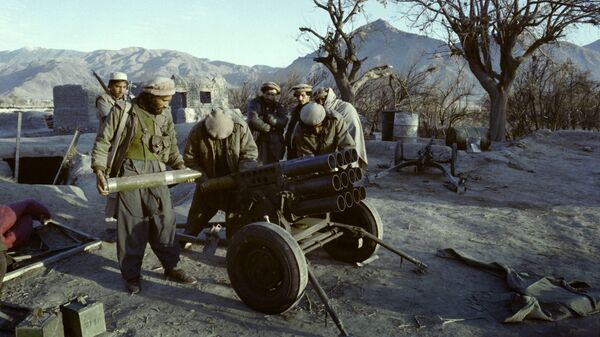 Afghan With ‘Unique’ Looks Forced to Bribe Police, Fear Abduction
Omar Mateen, the man believed to be solely responsible for the June 14 Orlando shooting massacre, was born in the United States 29 years ago, to Afghan parents who fled to the US as refugees, following the fulfillment of  a scheme by President Jimmy Carter’s National Security Advisor Zbigniew Brzezinski to inveigle the Soviets into Afghanistan to saddle Moscow with its own Vietnam. In 1977 Afghanistan had no refugees and Brzezinski, at the time, set in motion events that have come full circle, to this tragedy, leaving Afghanistan today with the second-largest refugee population in the world.

In 1977 Afghanistan was transforming itself into an enlightened, modern and democratic society. Eyewitness accounts from the 1960s and 1970s document rapid changes embraced by Afghan men and women, across a broad spectrum of society. Despite its poverty, Afghanistan had been independent in its foreign policy and self-sufficient in many areas, including food production, in a vivid illustration of what life is like when Afghans control their own state. It was also the year that Zbigniew Brzezinski stepped into the role as National Security Advisor to US President Jimmy Carter. Brzezinski quickly inaugurated a plan to lure the Soviet Union into an invasion of Afghanistan, a plan that was fulfilled on December 27, 1979. The blowback from Brzezinski’s scheme, even after almost 40 years, has delivered another dagger into the heart of America’s soul as well as the LGBT and Muslim global community.

How Zbigniew Brzezinski did it.

Casualties of War: Global Jihadism Linked to More Than Half of War Deaths
Upon entering the White House in 1977, Brzezinski formed the Nationalities Working Group (NWG), dedicated to weakening the Soviet Union by inflaming ethnic tensions, especially among the Islamic populations of the region. While Brzezinski activated his scheme, former CIA operative Graham Fuller was station chief (1975-1978) in Kabul. Conveniently for Brzezinski, Fuller’s focus was on how to politicize the Islamic world on behalf of American interests. As Fuller explained his thesis: "In the West the words Islamic fundamentalism conjure up images of bearded men with turbans and women covered in black shrouds. And some Islamist movements do indeed contain reactionary and violent elements. But we should not let stereotypes blind us to the fact that there are also powerful modernising forces at work within these movements. Political Islam is about change. In this sense, modern Islamist movements may be the main vehicle for bringing about change in the Muslim world and the break-up of the old "dinosaur" regimes.”

NATO to Keep Presence in Afghanistan, Continue Support for National Forces
In 1977 Fuller was in a position to activate Brzezinski’s scheme. As CIA station chief in Kabul he was perfectly positioned to provide Brzezinski with the intelligence necessary to build a case for President Carter to sign a directive allowing him to lure the Soviets into invading Afghanistan.
As the first American TV crew, in 1981, to gain access to Kabul after the Soviet invasion, we got a close-up look at the narrative supporting President Carter's "greatest threat to peace since the second world war" and it didn't hold up. What had been presented to the public as an open-and-shut case of Soviet expansion by Harvard Professor Richard Pipes on the MacNeil-Lehrer News Hour could just as easily be defined as a defensive action within the Soviets' legitimate sphere of influence. Three years earlier, Pipes' Team B Strategic Objectives Panel had been accused of subverting the process of estimating national security threats by inventing threats where none existed, and intentionally skewing findings along ideological lines. In the early 1980’s that ideology was being presented as fact by America's Public Broadcasting System.

In 1983 our press team returned to Kabul with Harvard Negotiation Project Director Roger Fisher, for ABC's Nightline. Our aim was to establish the credibility of American claims. We discovered, from high-level Soviet officials, that the Kremlin wanted desperately to abandon the war, but the Reagan administration was dragging its feet. From the moment he entered office, Reagan and his administration demanded that the Soviets withdraw their forces, at the same time keeping them pinned down through covert actions that prevented them from leaving. Though lacking in facts and dripping in right wing ideology, this hypocritical foreign-policy campaign was embraced by the entire American political spectrum and continues to be willfully-unexamined by America's mainstream media.

At a conference conducted by the Nobel Institute in 1995, a high-level group of former US and Soviet officials faced off over the question: Why did the Soviets invade Afghanistan? Former National Security Council staff member Dr. Gary Sick established that the US had assigned Afghanistan to the Soviet sphere of influence years before the invasion. So why did the US choose an ideologically-biased position when there were any number of verifiable fact-based explanations for why the Soviets invaded? To former CIA Director Stansfield Turner, responsibility could only be located in the personality of one specific individual. "Brzezinski's name comes up here every five minutes; but nobody has as yet mentioned that he is a Pole." Turner said. "[T]he fact that Brzezinski is a Pole, it seems to me was terribly important."

What Turner was suggesting in 1995 was that Brzezinski's well-known Russophobia led him to take advantage of a Soviet miscalculation. But it wasn't until the 1998 Nouvel Observateur interview that Brzezinski boasted that he had provoked the invasion, by getting Carter to authorize a presidential finding to intentionally suck the Soviets in, six months before Moscow considered invading. Yet, despite Brzezinski's admission, Washington's entire political spectrum continued to embrace his original false narrative, that the Soviets were embarked on world conquest.

Asia
Recruitment Drive: Afghanistan to Employ More Women Into Police Ranks
For Brzezinski, getting the Soviets to invade Afghanistan was an opportunity to shift Washington toward an unrelenting hard line against the Soviet Union. By using covert action, he created the conditions needed to provoke a Soviet defensive response, which he then used as evidence of Soviet expansion. However, after Brzezinski’s simple exaggerations and outright lies about Soviet intentions became accepted, they found a home in America's imagination and never left. US foreign policy, since that time, has operated in a delusion of triumphalism, provoking international incidents and then capitalizing on the chaos.

From its origins in 1977 as a covert program to destabilize the Soviet Union, through ethnic violence and radical Islam in Afghanistan, Soviet Georgia, Azerbaijan and Chechnya, a line can be drawn to the Orlando massacre shooter. The theories, practices and policies implemented by Brzezinski, prior to the Soviet invasion of Afghanistan, have found their logical evolutionary step, and the violence continues.

If it hadn’t been for Brzezinski’s scheme, Omar Mateen, the man believed to be solely responsible for the June 14 massacre, most likely would have been born in Afghanistan 29 years ago, instead of the United States. We will never know what kind of man Mateen might have become had he been born and raised in the home of his ancestors. One thing is sure; the time has come for Americans to question whether the legacy of Brzezinski’s obsession with conquering the world at any cost should continue to be an American dream as well.
Newsfeed
0
Access to the chat has been blocked for violating the rules . You will be able to participate again through:∞. If you do not agree with the blocking, please use the feedback form
The discussion is closed. You can participate in the discussion within 24 hours after the publication of the article.
To participate in the discussion
log in or register
loader
Chats
Заголовок открываемого материала