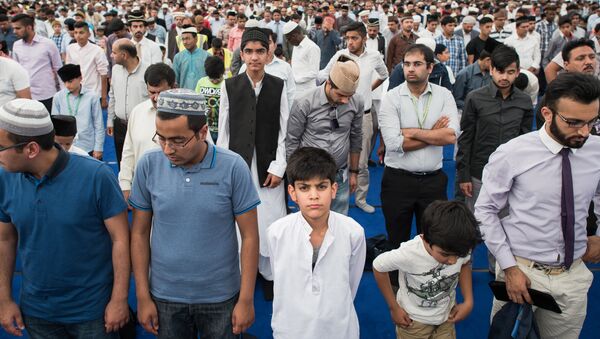 © AFP 2023 / Leon Neal
Subscribe
International
India
Africa
A center-right leaning think tank in Britain has published its findings from what it claims to be "the most extensive research of British Muslims ever conducted." However, the survey results have drawn accusations from the Muslim Council of Britain (MCB) for "de-legitimizing and demonizing Muslims."

The Policy Exchange, along with polling company, ICM, surveyed more than 3,000 British Muslims across the UK "to understand their attitudes towards a range of issues."

And while the report 'Unsettled Belonging: Britain's Muslim Communities' found that "a quarter of British Muslims felt there was no such thing as extremism" and that "perception that the threat from extremism was to some degree overblown and exaggerated," it also found that Britain's Muslim communities have "separatist" tendencies and a "deeply worrying" belief in conspiracy theories.

However 90 percent of respondents said they had not been intimidated by others expressing extremist views.

Still relaxed about living in the post-truth world? From report today by @policy_exchange pic.twitter.com/96PPCPBalW

But the report also found that more than half of those who took part in the survey felt a very strong sense of belonging to their community with 56 percent feeling "very strongly," 37% feeling "fairly strongly" and only seven percent admitting they did not feel attached to their community.

Exploring the issue of radicalization, more than half of the respondents (57%) agreed that 'poverty, unemployment and lack of economic opportunity' were important factors in helping explain radicalization.

Tackling perceptions about the British government's counter-radicalization program Prevent, the report also suggested that minister shouldn't be "spooked" into abandoning it — or apologizing for it.

"Our survey shows that there is support for government initiatives to tackle the problems of radicalization", and that many members of Britain's Muslim communities are "relaxed about government intervention and are actually supporting of traditional 'law and order' policies."

The report suggests that organizations such as the Muslim Council of Britain "have very little support among British Muslims" and that Muslims in Britain are actually "much more comfortable than is commonly believed with government-led initiatives against radicalization" and that more than half of all the Muslims surveyed think that they should be doing more themselves to combat extremism in their own communities.

However, the MCB has accused the Policy Exchange think tank of seeking to "de-legitimize" the Council.

​"The report utilizes a poll commissioned from ICM, but we are struck by the lengths the report has taken to misrepresent what are otherwise promising results."

The MCB also accused the think tank of pursuing an agenda "to cast British Muslims as separate, dangerous and in need of saving."

"It has provided ample fodder to countless headlines demonizing Muslims."

However, the report's foreward, written by Birmingham MP, Khalid Mahmood, suggests that the findings "can contribute to the further integration of British Muslims."

Outstanding report by @khalid4PB for @Policy_Exchange on Islam in Britain. Well worth reading here: https://t.co/HAUxZeY2X2