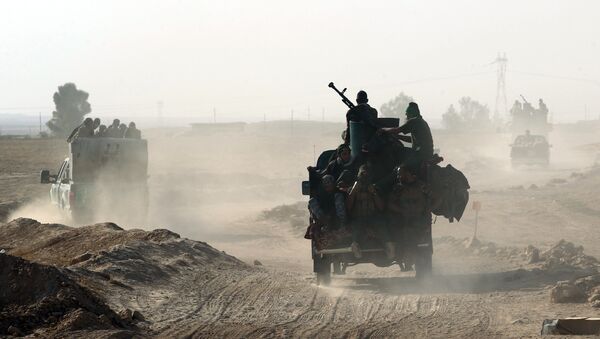 © AFP 2021 / AHMAD AL-RUBAYE
Subscribe
On Wednesday, the United Nations issued a new warning about humanitarian conditions in the Northern Iraqi city of Mosul, where Daesh militants are currently struggling for control against US-backed Iraqi forces.

The offensive against the jihadists has lasted more than six weeks, and Baghdad is currently trying to ferret out the terrorists embedded amongst civilians in the eastern districts where Iraqi troops have not yet been able to penetrate.

The UN humanitarian coordinator’s office said "The situation in eastern Mosul city close to the front lines remains fraught with danger for civilians. Mortar and gunfire continue to claim lives," and that "The limited supplies of food and water are running out, amid concerning reports of food insecurity emerging from the city."

Daesh has killed residents they suspect of aiding the Iraqi forces, including 20 people who had their dead bodies displayed three weeks ago for the crime of disseminating intelligence to "the enemy." Kate Gilmore, Deputy U.N. High Commissioner for Human Rights, said Wednesday that the zealots shot and killed 27 civilians last week in Mosul’s Muhandiseen Park.

A local official said Tuesday that since a pipeline was hit in the midst of battle, 40% of residents, roughly 650,000 people, have been left without water, and aid workers report that skyrocketing food prices are making it very difficult for poor families to feed themselves.

The high food prices are a result of the alliance of Shi’ite groups backed by Iran called the Popular Mobilisation forces cutting off the supply route to Mosul from Daesh-held areas of Syria. An unnamed humanitarian worker said that the prices for basic commodities could double "in the short term" as a result of the supply line being disrupted.

There also reports that residents have been drinking water from wells, is salty to the taste and must be boiled before it’s consumed.

Mosul is Daesh’ last stronghold in Iraq, and is considered central to destabilization efforts against the caliphate the group established in Iraq and Syria. Popular Mobilisation forces are closing in from the west while Kurdish and Iraqi government forces surround Mosul in the north, south and east.

As winter approaches, Iraqi forces say the change in weather favors Daesh. Maan al-Saadi, an elite Counter Terrorism Service commander said, "The main goal for CTS is the [Tigris] river…The federal police and the army will deal with the western part of the city."