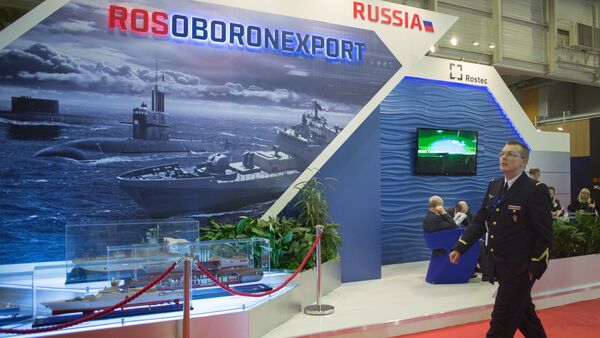 Rosoboronexport's participation in the Chile's EXPONAVAL 2016 exhibition is aimed at promoting the Russia-manufactured naval equipment in Latin America.

"Rosoboronexport's participation in the EXPONAVAL 2016 is aimed at the promotion of naval armaments and special equipment for the navies of the region. Latin America is one of the regions with the biggest prospects in the context of development of military technical cooperation," Azizov was quoted as saying in the Rosoboronexport's press release.

The prospects for cooperation may be turned into reality taking into consideration the plans of such countries as Argentina, Brazil, Chile, Columbia, Mexico, Peru and Venezuela to upgrade and provide their naval forces with advanced military equipment, Azizov added.

The 10th international naval and maritime exhibition EXPONAVAL 2016 is held in the Chilean region of Valparaiso on November 29 — December 2. The four-day event is sponsored by the Chilean Defense Ministry and is dedicated to the issues related to the naval defense and procurement of naval equipment.

According to Rosoboronexport's press service, Russia is showcasing over 200 pieces of military equipment at the exhibition, including Project 12150 Mangust fast patrol boats, the Varshavyanka-class (Project 636) submarines and Amur 1650 class submarines among other vehicles.