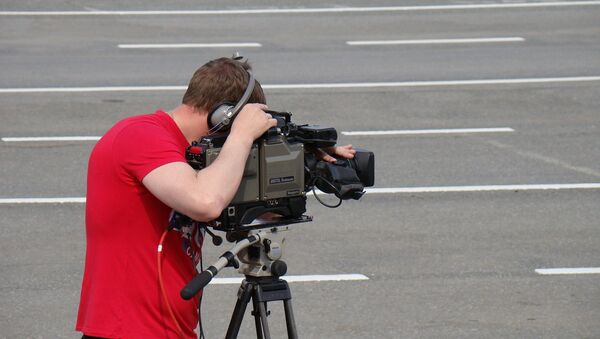 © Photo : Pixabay
Subscribe
The resolution against Russian media "propaganda" adopted by the European Parliament is a violation of freedom of speech and reaffirms the bloc's media dictatorship, Gianmatteo Ferrari, a member of the Italian Lega Nord party, told Sputnik on Monday.

Resolution on Russian Media Proves 'EU Parliament is Tool of US Administration'
MOSCOW (Sputnik) — On Wednesday, the European Parliament voted in favor of a resolution on countering such Russian media outlets as the Sputnik news agency and the RT broadcaster. Out of 691 lawmakers taking part in the vote, 304 voted in favor of the resolution, 179 voted against it, and 208 abstained. Therefore, less than half of the lawmakers supported the resolution.

"The EU is a political and media dictatorship and this resolution [against Russian media] is the confirmation. It is certainly a violation of freedom of speech and of the press. And unfortunately it is only the tip of the iceberg," Ferrari said.

The European Parliament's resolution said that Sputnik and RT posed a danger to European unity and called for extra European Commission funding for counter-propaganda projects. It also draws parallel between Russian media and the propaganda disseminated by the Islamic State, a jihadist group outlawed in Russia and many other countries.

European Resolution 'Best Acknowledgment' of Sputnik, RT's Achievements
According to Ferrari, there are even more serious violations of rights in the European Union such as the restriction of freedoms of the peoples.

"There are even more serious events. The limitation of freedom of peoples. If a nation holds a referendum which results do not fit the Brussels politicians that referendum is considered null or they re-do or make a law that bypasses it," Ferrari added.

000000
Popular comments
I had never heard of Sputnik until it was mentioned in a BBC article a week ago. It is reassuring that at last, even if they mention its existence in negative terms, they have been forced to acknowledge that there ARE other sources of news in the world besides all the western propaganda units. Hence I have come to judge for myself and see nothing bad, but am glad that I have now another alternative to the sadly falling standards of BBC from which to get the news. My only critique is that you don't write the date in the formal correct manner. updated 18:05 28.11.2016 should have been written 2016 11 28 18:05:28 If we can't even get the numbers right then where in the world do we expect to agree on more controversial matters? Thankfully most people in the world write the date correctly, just USA, many Europeans and a few other former colonies hang on to their confused illogical backward custom. 2016 12 04 11:13:53 Kenneth Keen in France
KKeen
4 December 2016, 13:16 GMT
000000
This could happen very soon in the USA and Canada too. Will the IT teams at RT and Sputniknews be coming up with an app soon for its loyal audience please, to protect against such informational isolation? I would pay for it for myself, Kabloomov and my hyacinths.