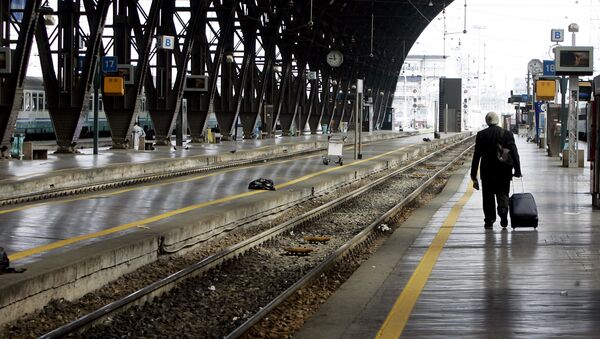 © AP Photo / Antonio Calanni
Subscribe
Public transport, railway and judiciary employees in Italy are carrying out a nationwide strike on Friday, which was called by several unions and is aimed at protecting the rights of workers.

Over 150 Flights Canceled in Italy Due to Alitalia Staff Strike
ROME (Sputnik) – The railroad strike began with the suspension of regional trains at midnight local time on Friday (23:00 GMT on Thursday), which is expected to last until 9 p.m. (20:00 GMT). Passengers will, however, be guaranteed service during two three-hour slots: from 6 a.m. to 9 a.m. and from 6 p.m. to 9 p.m., Corriere della Sera reported.

According to the train operator Trenitalia, during the strike, high-speed trains, long-distance trains and airport express trains from Rome's Termini Station to Fiumicino Airport will run as usual.

Public transport sector employees in a number of cities are also on strike, with trams, buses, the underground and local trains suspended for the majority of the day in Rome.

The transport strike will not affect the regions of Liguria and Piedmont, which have been subjected to flooding and bad weather conditions over the last few days.

In addition to transport workers, justice sector employees will also join the nationwide strike, and the prosecutor's office and courts across Italy will be closed.

In October, the unions called a railway workers' strike over changes to working hours, an increase in the retirement age and potential privatization.