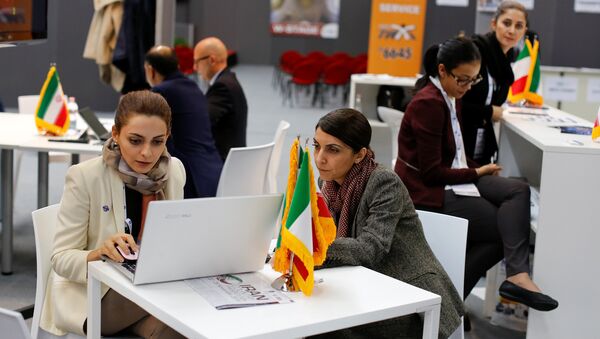 Pedal to the Metal: Iran – Italy Gas Deal Leaves Sanctions in the Dust
In an interview with Sputnik's Persian edition, Iranian economics expert Hoshyar Rostami said that the development of trade relations between Tehran and Rome will not be tarnished by the coming Trump presidency.

The interview came after Italian Industry Minister Carlo Calenda promised to support business deals with Iran worth billions of dollars despite the fact that Donald Trump was elected as the US President, according to Reuters.

Calenda added that he would visit Iran along with Italian Economy and Finance Minister Pier Carlo Padoan in early 2017. He made the remarks during the opening ceremony of a trade fair for Iranian companies in Rome on Tuesday. 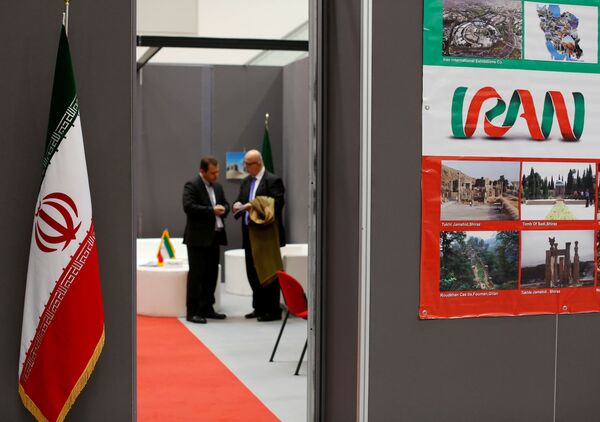 Iranian exhibitors stand in a booth during the opening of the fair "Iran country presentation" in Rome, Italy November 22, 2016
© REUTERS / Tony Gentile

Tehran re-joined the global trading system in January 2016 after the anti-Iranian sanctions were partially lifted. Italian companies were quick to clinch deals with their Iranian counterparts amid Trump's warnings to tear up the hard-won Joint Comprehensive Plan of Action (JCPOA), or the Iranian nuclear deal, signed last year.

This international agreement, which was inked in July 2015 between Iran and six world powers, lifted decades of crushing sanctions against Tehran in exchange for caps on its uranium enrichment and blocks to other avenues for creating weapons-grade nuclear fuel, all to be verified by UN inspectors. The deal came after nearly a decade of negotiations.

In his pre-election campaign statements, Trump called the agreement a "disaster" and "the worst deal ever negotiated," pledging that he will tear it up the very first day he enters office.

Speaking to Sputnik's Persian edition, Hoshyar Rostami noted that none of the JCPOA signatories, including the United States, can infringe the agreement.

"Even if we assume that Trump will want to deliver on his ambitious and offensive promises pertaining to the anti-Iranian sanctions, he will be unable to prevent the implementation of the JCPOA agreement. It cannot be broken by any of its signatories, including the US. There will be serious legal consequences for the United States if they take such a step," Rostami said.

He added that the US will very likely prod Europeans to become Washington's allies in terms of slapping new sanctions against Iran given that EU countries "are very interested in the Iranian economy returning to the world trade caravan."

Rostami said that both Europeans and Iranians will benefit from cooperation and that Italy, along with Germany and France, should "play a key role in convincing the United States of adhering to the JCPOA deal."

"Tehran's possible EU lobby allied circles may help mitigate Donald Trump's hardline stance on Iran. But if this does not happen, the process for the implementation of the JCPOA agreement will go ahead just a slightly slower speed. As for trade relations between Iran and the EU countries, they will not be damaged," he pointed out.

Trump to Make 'Strategic Mistake' If Cancels Iran Nuclear Deal - Military Aide
Earlier this month, EU foreign policy chief Federica Mogherini said that the European Union is due to ensure the implementation of Iran's nuclear deal by all parties, and this position will not change after the new US administration takes office.

Trump won the November 8 US presidential election, stunning his opponents and a large number of mainstream media who considered his Democratic rival Hillary Clinton the overwhelming favorite. The inauguration will be held on January 20, 2017.

000000
Popular comments
Trump son in law is a Jews man. Trump does not know history and he still under the influence of his daughter's husband think that God has created the Jews country. Perhaps he does not know that Israel was created by a piece of paper typed in the UN, because the Jews economical support to the Allies.