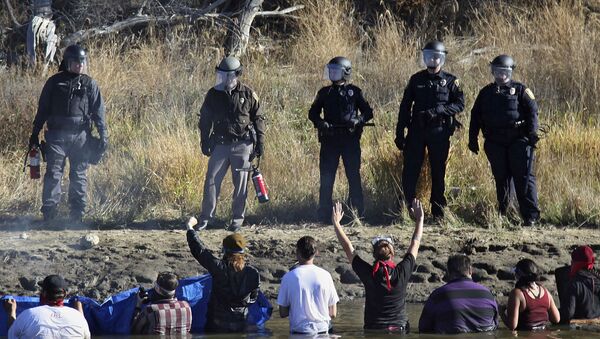 Thanksgiving Day is commonly associated in America with the Pilgrims and "the Indians" sitting down to a big harvest feast in 1621 to celebrate a peace treaty. But there is no end in sight for the violence in North Dakota, where the Standing Rock Sioux Tribe is being brutally attacked while it desperately struggles to stop the construction of the Dakota Access pipeline.

"I'm a prisoner of war in my own land," said Frank Sanchez, a 61-year-old delegate from the Yankton Sioux Tribe, in an interview with The Huffington Post. "That's the only way I can see it."

Dakota Access Pipeline Protesters 'Disappointed' With Obama's Inaction
The tribe, supported by a coalition of environmental activists and groups of indigenous people that have arrived from across the nation, has been peacefully protesting the construction of the pipeline at encampments since April.

The approximately 1,200-mile oil pipeline is intended to transport some 450,000 barrels of oil per day across the Missouri River and other sensitive ecological habitats. According to Standing Rock leaders, the $3.8 billion project by Energy Transfer Partners would ruin sacred sites near the tribe's reservation and threaten to contaminate the water supply of millions of people from Lake Oahe.

Confrontation between the demonstrators and the federal government continues to produce friction, which escalated into violence in which police outfitted in riot gear used pepper spray, tear gas, rubber bullets and water blasted in freezing temperatures against the protesters, while carrying out hundreds of unnecessarily-violent arrests.

Activists Call Police Brutality as Dakota Access Pipeline Protester May Lose Arm
On November 21, in yet another confrontation with heavily-militarized police, 21-year-old activist from New-York, Sophia Wilansky, was reportedly hit by a concussion grenade and is currently at risk of having her left arm amputated. Police used water cannons when temperatures were well below freezing, resulting in many people being hospitalized with hypothermia.

This Sunday, around 300 Native Americans and non-native supporters were injured in a 10-hour clash with law enforcement, as force was again used to keep protesters off a barricaded bridge near the construction site, which, the Sioux say, is the main access point to their reservation.

On Thursday the Sioux will celebrate Thanksgiving alongside hundreds of non-native protesters from across the US, although the tribe does not observe the holiday, according to Sanchez.

"People need to realize that these situations still exist in this country. We're not savages, but there have been times when we had to prove we were human. These wounds need to be addressed and healed in order to really be thankful," he said.