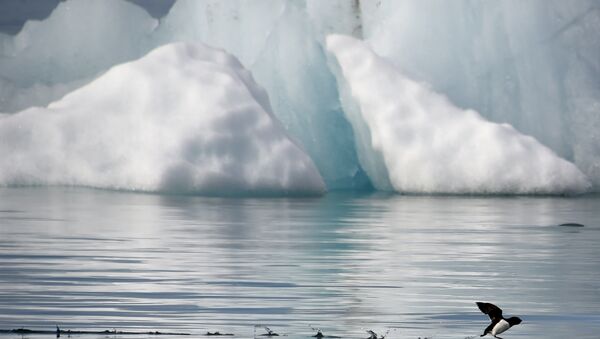 © AFP 2021 / Dominique Faget
Subscribe
As polar night has covered the Arctic, it is supposed to be extremely cold there. But on the contrary, it is super-hot by polar standards, with temperatures hitting new highs.

"Today's latest #Arctic mean temperature continues to move the wrong direction. . . up. Quite an anomalous spike!" said Zack Labe, a PhD student at the University of California at Irvine who studies the Arctic, on Twitter.

As temperature has increased to about 36 degrees Fahrenheit warmer than usual, the extent of sea ice has decreased.

Eat This, Global Warming! Bird Poo to Repel Arctic Climate Change
Jennifer Francis, an Arctic specialist from Rutgers University, told the Washington Post, "The Arctic warmth is the result of a combination of record-low sea-ice extent for this time of year, probably very thin ice, and plenty of warm/moist air from lower latitudes being driven northward by a very wavy jet stream."

This year set a new record. In October, the temperature in the Arctic was 4 degrees above average. November shows even higher figures.

"We are used to measuring temperature records in fractions of a degree, and so this is different," the World Meteorological Organization (WMO) said.

"The sea ice is at a record low right now, for this time of year, that's one thing," said Mark Serreze, who heads the National Snow and Ice Data Center in Boulder. "And why it's so low — again, there's so much heat in the upper ocean in these ice-free areas, the ice just can't form right now. The ocean's just got to get rid of this heat somehow, and it's having a hard time doing so."

The researchers say that the weather could change and the temperatures may cool. But that seems unlikely, as recent trends show only increasing warmth.