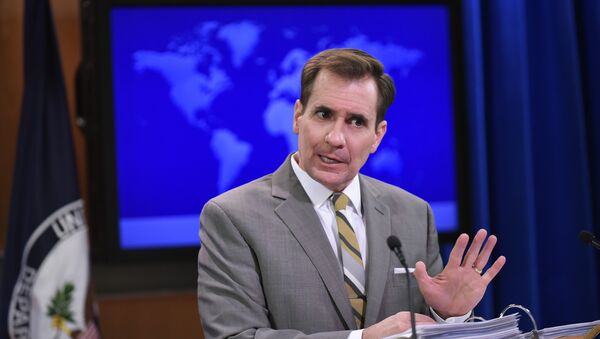 © AFP 2023 / MANDEL NGAN
Subscribe
International
India
Africa
Unable to back up the claims made by the US State Department about Russian forces allegedly bombing hospitals in Syria, spokesman John Kirby had to resort to Plan B, as in B for Ballistic.

US State Department spokesman John Kirby found himself hard pressed during a press briefing when RT journalist Gayane Chichakyan asked him to provide some specifics regarding the claims made by the department about Russian forces allegedly carrying out strikes against hospitals in Syria.

"I'm sorry, but I'm not going to put Russia Today on the same level with the rest of you who are representing independent media outlets," Kirby declared when AP journalist Matt Lee attempted to interject on Chichakyan's behalf.

For some reason, Kirby became quite upset when asked about the location of the "five hospitals and a clinic" which he claimed fell victim to Russian strikes. The spokesman kept insisting that the information was provided by "credible aid organizations", telling Chichakyan to "go look at the information that many of the Syrian relief agencies are putting out there publicly."

Eventually, apparently becoming outraged by the RT journalist’s persistence and still adamantly refusing to provide any details about the allegedly attacked medical facilities, Kirby demanded that Chichakyan direct her questions at the Russian Defense Ministry.

"You work for Russia Today, right? Isn't that your agency?.. And so why shouldn't you ask your government the same kinds of questions that you're standing here asking me?.. Ask them about their military activities. Get them to tell you what they're [doing] or to deny what they're doing," Kirby declared.

Russian MoD Slams Claims of Destroyed Hospitals in Aleppo as Fake
At the same time, the spokesman kept insisting that the accusations are being levelled not by the US Department of State but by "relief agencies that we find credible." He refused to elaborate exactly which agencies he meant, offering instead to provide a list of these organizations after the briefing was over.

Likewise, Kirby apparently believed that there was no need to back up his accusation that Russian and Syrian forces are allegedly blocking humanitarian aid deliveries to Aleppo, simply insisting that since there were apparently no such deliveries conducted during the last month, "there's no question in our mind that the obstruction is coming from the regime and from Russia."

And when AP journalist Matt Lee told Kirby that Chichakyan is "a journalist just like the rest of us are" and that she was asking questions that were "not out of line," the spokesman suddenly revealed that apparently the US Department of State does not treat all news agencies equally, blasting RT as a "state-owned outlet."