US President Barack Obama Addresses Media Ahead of Overseas Trip 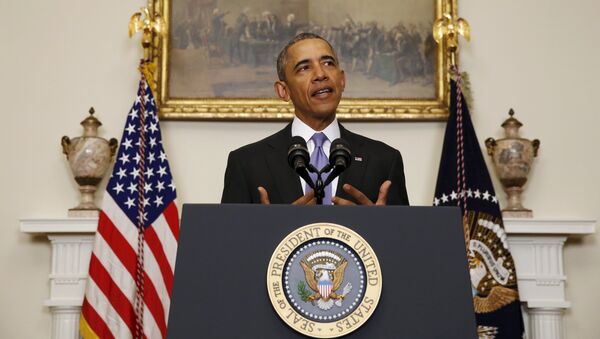 Turning Tides? Obama to Spend More Time Counseling Trump On White House Duties
President Obama’s address, his first since the election of Republican Donald Trump, came ahead of a week-long trip abroad to reassure Washington’s allies about the direction of US foreign policy, given the warnings from the president-elect’s camp to Obama not to try to force agenda items on his way out of the White House.

​Obama is slated to meet with Greek Prime Minister Alexis Tsipras on Tuesday before heading to Germany on Wednesday to meet with German chancellor Angela Merkel.

While in Europe he will also hold an audience with leaders from France, Spain, the United Kingdom and Italy before making his way to Lima, Peru, where he will attend this year’s Asia-Pacific Economic Cooperation conference.

"Do I have concerns? Absolutely, of course I’ve got concerns," Obama stated of his feelings on Trump's election. "He and I differ on a whole bunch of issues."

Obama told reporters that president-elect Trump has nonetheless indicated his interest in preserving the US commitment to the NATO alliance.

"He [Trump] expressed a great interest in maintaining our core strategic commitment to NATO and the Trans-Atlantic alliance," Obama stated. "There is no weakening of resolve when it comes to America’s commitment to maintaining a strong and robust NATO relationship."

When it comes to immigration, President-elect Donald Trump should not deport Americans who were illegally brought to the United States by their parents as young children, Obama said.

"I will urge the president-elect [Trump] and the incoming administration to think long and hard before they are endangering the status of what for all practical purposes are American kids," the president stated. "These are kids who were brought here by their parents, they did nothing wrong… if they’re part of this program they’re solid, wonderful young people of good character."

Russia
Vladimir Putin Holds Phone Talks With US President-Elect Donald Trump
Turning to Syria, Obama reiterated his belief that a military option is not readily available to resolve the ongoing crisis there.

"Syria is a much more messy situation [than Libya]. We have made every effort to try to bring about political resolution to this challenge," Obama told reporters. "We don’t have that [military intervention] option easily available to us."

Earlier on Monday, Russian President Vladimir Putin and US President-elect Donald Trump discussed over the telephone the potential to settle the Syrian crisis.

Trump should also carefully consider the results of the Iranian nuclear deal before making a decision to suspend it, Obama added.

"We now have over the year of evidence that they [Iran] have abided by the agreement… My suspicion is when the president-elect comes in and he is consulting with Republican colleagues on the Hill that they will look at the facts."

During the 2016 presidential campaign, Trump widely criticized the July 2015 Iran nuclear agreement negotiated by Obama as disastrous. The agreement seeks to ensure the peaceful nature of Iran’s nuclear program in exchange for sanctions relief.

But Obama claimed the Trump administration would have hard time explaining cancelling the agreement as is has stopped Iran from obtaining a nuclear weapon.