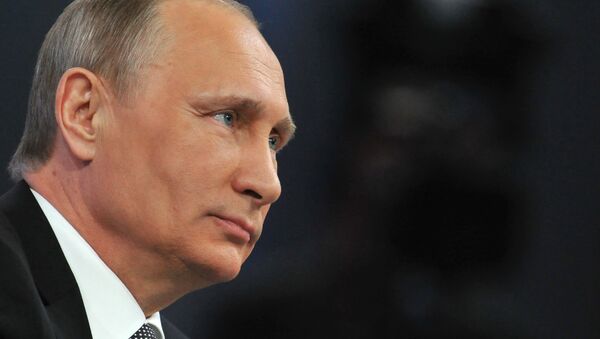 Trump Receives 'Beautiful' Letter From Putin Following US Election Victory
Trump and Putin reportedly shared their views on combatting international terrorism and extremism, and on settling the crisis in Syria.

Putin reportedly congratulated the president-elect on his victory, and wished him success.

The Russian president also told Trump that Russia is ready to maintain constructive dialogue with the new US administration, based on principles of equal rights, mutual respect, and non-interference in the international affairs of one another.

"President-elect Trump noted to President Putin that he is very much looking forward to having a strong and enduring relationship with Russia and the people of Russia," the team said in a statement.

According to the Kremlin, both also stressed the importance of building a strong foundation for bilateral ties through economic development.

The year 2017 will mark 210 years since the establishment of diplomatic relations between Russia and the United States.

Putin and Trump also agreed to maintain phone contacts, and to plan a meeting in person soon.

Following Trump's victory, he had stated that he received a "beautiful letter" from the Russian president. The letter reportedly expressed hope that the administrations could work together to better the strained state of Moscow-Washington relations.

“We heard [Trump's] campaign rhetoric while still a candidate for the US presidency, which was focused on restoring the relations between Russia and the United States,” Putin said at the presentation ceremony of foreign ambassadors' letters of credentials in Moscow last week.

“We understand and are aware that it will be a difficult path in the light of the degradation in which, unfortunately, the relationship between Russia and the US are at the moment,” he added.

“The current US-Russian relations cannot be called friendly. Hopefully, with the new US president a more constructive dialogue will be possible between our countries,” he said in a statement on Wednesday.