What Do Ahmadinejad, Trump Have in Common? As Much as Robin Hood & King Richard 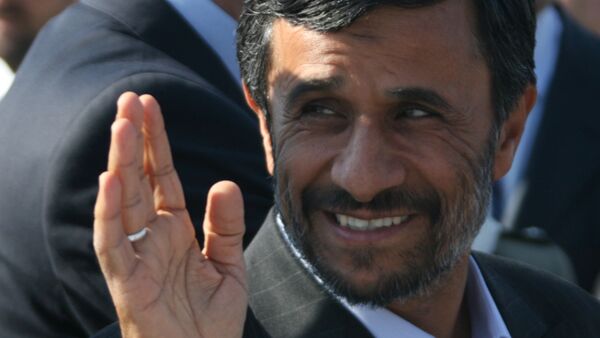 © Sputnik / Pavel Lisitsyn
/
Go to the mediabank
Subscribe
International
India
Africa
In the run-up to Tuesday's election in the US, which resulted in an unexpected victory for Donald Trump, the mainstream media went through a phase where they couldn't stop comparing the President-elect with former Iranian President Mahmoud Ahmadinejad. Dr. Alireza Rezakhah says this comparison is ridiculous. He told Sputnik why.

In the early hours of Wednesday morning, Trump was officially declared the winner of the US presidential race. His victory, which most pundits and the majority of the mainstream media failed to predict, caused shockwaves around the globe, with speculation rife about the kinds of domestic and foreign policy he will pursue as president.

Trump to Review Deal on Iran Nuclear Program - Foreign Policy Adviser
In the run-up to Election Day, the mainstream media in the US and Europe, most it biased against Trump, used various methods to try to attack and smear him. This included comparing him with world leaders who, deservingly or not, had gained a certain notoriety in the United States. Sure enough, eventually media began comparing him with former Iranian President Mahmoud Ahmadinejad.

The Iranian leader, who served as president between 2005 and 2013, was condemned across the political spectrum in the US during his tenure, by Republicans, who loved using the misquoted line about Ahmadinejad wanting to 'wipe Israel off the face of the map', and Democrats, who had a good chuckle at his expense over the (again misquoted) remark about Iran 'having no gays'. In short, the Iranian president was a figure everyone could agree to hate.

The trend to compare him to Trump began in early 2016, when a few blogs and minor media networks published stories about Trump's populism and unpredictability making him 'America's Ahmadinejad' or someone who 'used Ahmadinejad's playbook.'  These proved not to be critical enough, and in March The Telegraph released an article claiming that the Republican was actually "worse" than the former Iranian leader.

Trump 'Cannot Abandon US Obligations Under Iran Nuclear Deal or Annul It'
About a month before the election, the media big dogs jumped in, with The Guardian and The Washington Post both publishing articles comparing the billionaire to the humble barber-turned president, all apparently based on British academic Michael Axworthy's assessment, which boiled down to a few lines about the two men's "plain populism" and "unpredictability."

After Trump won the election, social media users, including some American-Iranians, and people who said they knew some Iranians, recalled the comparisons made months before.

Seeing a lot of this on social media —> A different Trump metaphor: America’s Ahmadinejad https://t.co/wfG6RcFPbj

Had a friend from Iran say Trump sounded identical to Ahmadinejad 10years ago. Thaaaat's unsettling. #yikes

​Sputnik Persian, conducting its own investigation of Iranian social media reactions to Trump, found that many users were similarly prone to making the comparison, but not for the same reasons that Western media was.

According to Iranians, just like Ahmadinejad, Trump had received the votes of ordinary people and the poor, instead of that of the elite or the middle class. Iranians agreed that both politicians are known for causing scandal, and for their populist tendencies.

#republican #Trump never be similar to the justice seeking #Ahmadinejad their only similarity is their #popularity #iraniansreacttotrump pic.twitter.com/jK3UFEJBs1

​However, Iranian US expert Dr. Alireza Rezakhah says that the comparisons made by both sides are superficial.

Speaking to Sputnik Persian, the professor stressed that "when we want to compare two personalities, or draw a parallel between two people, it's necessary to first establish the criteria. Personally, as a person from academia, I strongly disagree with and oppose such a pseudo-analysis of the personalities of Trump and Ahmadinejad, because such a comparison has no scientific basis."

Here's What Trump's Foreign Policy Will Look Like
At the same time, Rezakhah stressed that he fully understood "the reasons why Western media would resort to this subterfuge, rather than investigating the real reasons Trump won these elections. In fact, they are using a PR maneuver known as 'overthinking the problem'. In this case, they're trying to spin the subject of the supposed incredible similarity between Trump and Ahmadinejad."

Explaining why the comparison is foolish, the professor recalled that "first of all, it must be said that the political past of the two men has nothing in common. Before becoming president, Ahmadinejad had been engaged in politics for a long time, and accumulated a great deal of experience. He was politically active from the time of the Islamic Revolution of 1979, and was involved in perhaps its most resonant episode – the capture of the US Embassy in Tehran. Ahmadinejad was then governor of Ardabil Province the mayor of Tehran, and ran for a seat in parliament."

Trump, on the other hand, only entered the realm of politics a year ago, via his presidential bid. "Even in the ranks of the Republican Party from which he ran, Trump was a stranger," Rezakhah noted. "Trump is a billionaire, not a politician. So this 'pseudo-comparison' publicized by The Guardian is little more than an attempt to divert public attention from the reality that exists in US society, and the Trump phenomenon itself."

World
Persians Ponder How US-Iran Relations Will Develop Under Donald Trump
"But the way," Rezakhah stressed, "to be a politician means a certain degree of predictability. When Ahmadinejad ran for president, and subsequently won, everyone in Iran understood who would be part of the government. As for who will serve in Trump's administration – that remains a big question.  With his election, a huge cloud of anxiety and uncertainty has formed over the US [in that regard]."

Finally, the professor noted that even in their lifestyle and views, the two men are leagues apart. "The former Iranian president is not the owner of luxury villas or mansions, and lived in very modest circumstances similar to those of millions of ordinary Iranians. He continues to lead a very ascetic lifestyle. That is why Iranians gave him their votes, and why he is loved, and seen as the defender of the disadvantaged. It's difficult to imagine skyscraper owner Donald Trump being seen in such a light," Rezakhah concluded.

Ultimately, whether the comparison is valid or not, perhaps it will help in some way to tame any worsening in relations between Washington and Tehran once Trump takes office. Many Iranians are concerned that President Trump will attempt to revoke the Iran nuclear deal, and reactivate sanctions against the country.