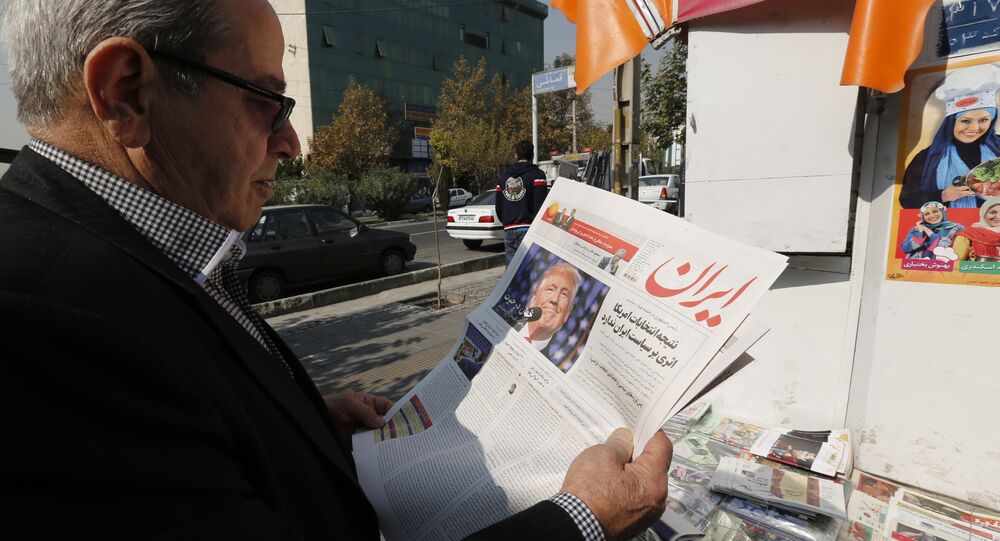 With the US presidential elections already behind us, it remains to be seen whether Donald Trump will manage to open a new page in the history of American foreign policy and change its stance on Iran, political commentator Sabbah Zanganeh told Sputnik Persian.

© AP Photo / Kevin Lamarque/Pool Photo
Who is Really Behind the US-Based Organization 'United Against Nuclear Iran'?
In an interview with Sputnik Persian, Iranian political commentator and former advisor to the Iranian Foreign Minister Sabbah Zanganeh said that only time will tell whether US President-elect Donald Trump will be able to open a new page in American foreign policy's history and change its stance on Iran.

The interview came after Donald Trump's eyebrow-raising victory in the November 8 presidential elections in the United States, in which he managed to get the better of Democratic candidate Hillary Clinton.

Speaking to Sputnik, Sabbah Zanganeh described moves by all the US presidents toward Iran as indicative of a negative policy pursued by "an aggressor state."

In this regard, one should wait and see how Donald Trump will act, given that he was not involved in Washington's previous aggressive policy towards Iran.

"Let's see whether he can really open a new page in the history of American foreign policy and offer a new way of development, pursuing a fair policy based on respect for the sovereignty of other countries," Zanganeh said.

© AFP 2020 / ATTA KENARE
No Price Too High: US Uses 'All Means Available' to Spy on Iran
It's too early to say whether Iranians are satisfied with Trump' election victory, he said, at the same time pointing to the fact that Iranians were earlier impressed by Trump's pre-election rhetoric on many pressing international issues.

"Only upon assessing his policies as the US leader, will Iran will be able to draw some conclusions and build plans for possible cooperation with the US," Zanganeh said.

He added that Trump is "currently facing a test of strength and that it remains to be seen whether he will pursue a policy of rapprochement with Russia and Iran and take the most effective measures against Daesh (ISIL/ISIS) and its sponsors."

Zanganeh described Trump's election win as an indicator of the American people's "rebellion" and protest against the Democratic Party and even the Republicans.

"His victory is a new milestone in history, because his policy is drastically different from the traditional dogmas and the foundations of the two American political parties. Trump's win was supported by those who condemn the internal and external policies of both major US parties," Zanganeh pointed out.

© AP Photo / Iranian Defense Ministry
Space: A New Frontier for Iran-US Cooperation?
Addressing his supporters on Wednesday, US President-Elect Donald Trump pledged that "every single American will have an opportunity to realize his or her potential."

He also pledged to always put US interests first and to "get along well" with all nations willing to get along with the US.

He added that Washington would seek "common ground, not hostility" and "partnership, not conflict."

Trump Not Marred by Aggressive US Policy Toward Iran - Ex-Adviser

US Continues National Emergency With Respect to Iran

Can Iran, US Restore 'Friendship' in ICJ After Tehran Files Case?