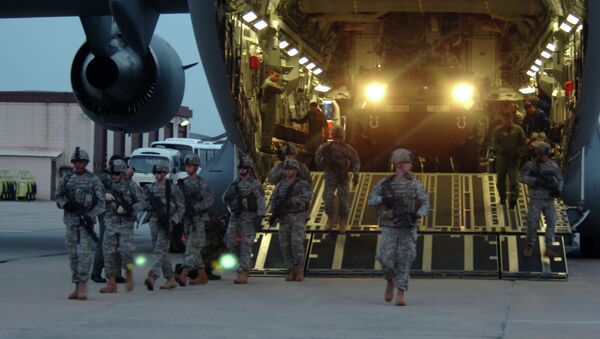 Over 600 units of ammunition were delivered to the US Air Force and Army in Germany recently, marking the single largest weapons deployment to Europe in the past 20 years. The ammo is part of the $3.4 billion European Renaissance initiative, meant to counter an imagined threat from Russia.

In an Army press release, Europe Commander Lt. Gen. Ben Hodges said "This is about deterrence. We could have 1,000 tanks over here, but if we didn't have the ammunition for them they would not have any deterrent effect. It's another example of the commitment of the United States to security and stability in Europe."

A train carrying the ammo is headed for Miesau Army Depot in Nordenham.

Hodges was present for the ammunition’s arrival and commented that Germany’s cooperation in the transport was key to its successful transfer.

He said, "The fact that the ammunition came from Nordenham port by rail all the way to Miesau is only possible because our ally, Germany, allows it to happen. So it's another way that Germany contributes to deterrence, is by enabling the movement of ammunition and equipment inside Germany for the United States Army."

The shipment arrived as part of the Army's Colorado-based 3rd Armored Brigade Combat Team’s January deployment to Europe, to take part in Operation Atlantic Resolve. The 4,000 troops will be the first deployment of rotating American units in the region and will consolidate with others in Poland before heading to Bulgaria, Estonia and other countries.

In May of 2018 the 2nd Cavalry Regiment, also based in Europe, will be receiving M1126 Stryker infantry carriers, with upgraded 30mm cannons.

Lt. Col. Brad Culligan, commander, 838th Transportation Battalion, Military Surface Deployment and Distribution Command, called the delivery "the ultimate theater sustainment,” saying that the US military is "bringing ammunition into the theater to resupply and set the stage for the European theater for any type of exercises or potential future missions that may come about."