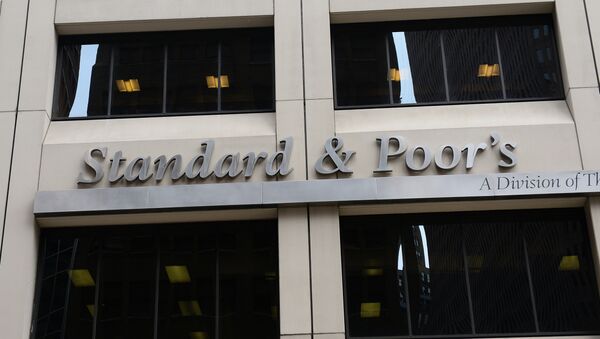 © AFP 2021 / EMMANUEL DUNAND
Subscribe
A key Indian government official has slammed western credit rating agencies for being parsimonious with their rankings. The intermittent complaints of bias once again highlights the need for neutral, independent and sympathetic rating agencies such as the one proposed by BRIC countries. BRICS Bank President also bats for a credible rating agency.

The S&P move does not seem to acknowledge India’s improved ranking in the World Bank’s Ease of Doing Business survey and Prime Minister Narendra Modi pushing the economic reforms agenda that includes a deal on a country-wide goods and services tax regime that will create a single market in the country.

“The report of S&P says that India has done all the right things. But if the rating has still not been upgraded, it does not bother us much but it calls for an introspection among those who do the rating,” India’s Economic Affairs Secretary Shaktikanta Das told journalists.

In fact, the Goa declaration clearly stated, “We believe that BRICS institution-building is critical to our shared vision of transforming the global financial architecture to one based on the principles of fairness and equity.”

BRICS NDB to Issue First Indian Rupee Bond Worth Up to $500Mln in 1Q17
The BRICS countries have taken the first step towards institution-building by making The New Development Bank (NDB) operational to meet infrastructure funding requirements of the members.

Batting for a rating agency backed by BRICS, New Development Bank president K.V. Kamath has expressed concerns over methodologies of the three prominent western global agencies (S&P, Fitch, Moody’s) saying that their subjective assessments constrain growth in emerging nations. Ratings of multilateral banks like the BRICS-promoted NDB were also affected by the parent countries’ ratings despite having deep capital buffers.

Kamath went on to suggest that a non-western approach to rate the emerging economies is the need of the hour. At present, three western agencies account for 90% of the rating market.

Russia and China too have been at the receiving end of the global rating agencies owing to their differences with western powers on major world issues. The time may be ripe for BRICS to quickly activate their plans for an institution that evaluates on the principles of fairness and equity.