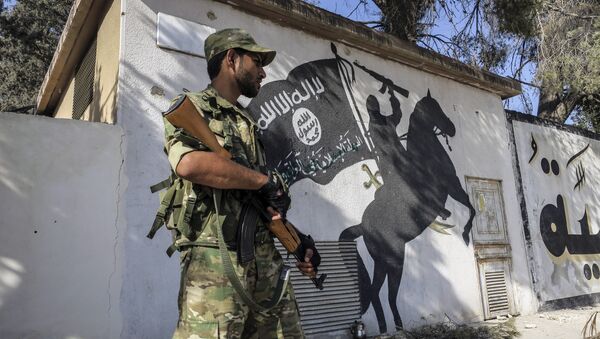 Ankara suggested the partipation of the Free Syrian Army's (FSA) in the operation to retake Daesh's de facto capital of Raqqa instead of the self-defense forces of the Syrian Kurds, Turkey’s Defense Minister Fikri Isık said Thursday.

US and Turkey Split Over Kurds' Involvement in Upcoming Raqqa Operation
ANKARA (Sputnik) — Earlier in the day, US-led coalition commander Stephen Townsend said the United States and Turkey were in talks over the Syrian Democratic Forces (SDF) involvement in the operation to free Raqqa from Daesh.

However, Ankara opposes SDF’s involvement since the force includes People's Protection Units (YPG), which Turkey considers to be an affiliate of the Kurdistan Workers' Party (PKK), outlawed in the country.

"Turkey argues that the operation for the liberation of Raqqa from Daesh should not involve participation of another terrorist group — YPG [Kurdish People Protection Unit]. As for alternatives, Turkey is ready to offer them. We, in particular, suggest using the support of the local forces, mainly the Free Syrian Army," Isik was quoted as saying by the Anadolu Agency.

Turkey May Send Jets for Possible Operation to Free Raqqa From Daesh
On Wednesday, Isik met with his US and French counterparts, Ashton Carter and Jean-Yves Le Drian, to discuss fighting against Daesh terrorists. Carter said that the US-led international coalition intended to start the operation to liberate Syria’s Raqqa in a few weeks.

In August, Turkish forces, backed by US-led coalition aircraft, began a military operation dubbed Euphrates Shield to clear the Syrian border town of Jarabulus and the surrounding area of Daesh. As Jarabulus was retaken, the joint forces of Ankara, the coalition and Syrian opposition continued the offensive southwest.