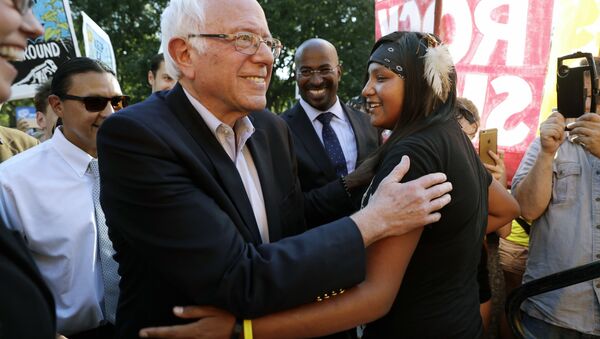 Vermont Senator Bernie Sanders and four of his colleagues have called on President Barack Obama to order a full environmental review of the controversial Dakota Access pipeline.

The pipeline is currently under protest by members of the Standing Rock Sioux Tribe, who point out that it threatens water sources and would desecrate sacred sites and culturally important landscapes.

"The pipeline's construction is not only a violation of tribal treaty rights, but has the potential to cause more damage to sacred land," it read. "Until there has been full and meaningful tribal consultation, all pipeline permits and easements should be revoked or denied."

"[T]he Dakota Access will have a significant impact on our climate," they wrote. "All fossil fuels infrastructure projects of this significance must be subjected to a test to consider the long term climate impacts." The new pipeline would have the same effect on the planet as adding 21.4 million more cars to the roads or operating 30 more coal plants, the authors observe.

"If there is one profound lesson that indigenous people have taught us, it is that all of us as human beings are part of nature," the Senators wrote. "We will not survive if we continue to destroy nature."

On October 9, a federal appeals court denied the tribe's request for a permanent injunction to block the $3.7 billion pipeline, which would pump 470,000 barrels of oil a day within a mile of reservation land and directly under two major rivers. The next day, a joint statement by the US Departments of Justice, Army and Interior requested that the company building the pipeline, Energy Transfer Partners, voluntarily halt construction. The company refused, and construction work was resumed the next day on private land amid increasing protest.

However, the company still needs one more permit from the Army Corps of Engineers to build on federal land underneath the Missouri River. It is this permit that Sanders and company aim to stop in the short term.

The environmental review requested by the Senators could take several months, Reuters reported.

A groundswell of support has been triggered by the Standing Rock Sioux Tribe’s refusal to accept the pipeline, and a camp of protesters at the edge of their reservation has been growing since mid-summer.

In the past week, actress Shailene Woodley was arrested while protesting the pipeline, and Democracy Now! Journalist Amy Goodman said she would turn herself in to authorities in response to a criminal complaint filed against her last month. She was charged with trespassing while covering the protests.

On October 11, activists in solidarity with the protesters managed to briefly shut down five pipelines in four states bringing oil to the US from Canada.

More than 300 tribes have expressed their support for the protest, and 19 cities on October 13 passed ordinances of support.

Sanders, who lost his primary bid to be the Democratic nominee for president to Hillary Clinton, has issued a statement in support of the Standing Rock Sioux and addressed Dakota Access protesters in front of the White House.