Chinese Yuan's Popularity on the Rise in Russian Financial Market 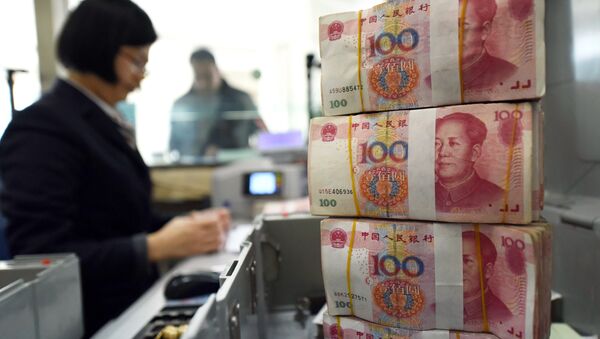 Recently, the International Monetary Fund (IMF) included the Chinese Yuan in its basket of reserve currencies. The Yuan is getting more and more popular abroad China. In Russia, the Chinese currency is high-in-demand from companies as well as ordinary customers.

China to Create First Yuan Clearing Bank in US
On October 1, the Chinese national currency renminbi (yuan) was included into the IMF’s reserve currencies basket.

The IMF said the inclusion of the yuan is an important milestone in integrating the Chinese economy into the global financial system.

This move is of special importance for Chinese financial institutions operating abroad. For example, the Russian branch of Bank of China has been seeing a growing number of customers, from corporate clients to Russian tourists and Chinese students.

Russia, China Building Yuan-Based Alliance Against Dollar
Bank of China launched yuan denominated transactions in 2009. Since that time, the popularity and demand for the Chinese currency have been steadily increasing.

On the one hand, the reason is that Russian companies need more yuan for payments. On the other hand, China’s stable economic growth is building up Russia’s confidence in the yuan.

"Today, we’re witnessing that yuan-denominated transactions are getting more and more popular in the Russian market. Russia and China are also intensifying cooperation on payments in national currencies. For example, last year the total sum of contracts including yuan at the Moscow Exchange topped 80 billion yuan," Gao Yan, head of the Bank of China’s branch in Russia, told CCTV.

Over the past 20 years, the number of Chinese commercial banks operating in Russia reached four. Earlier, Russian customers were hardly acquainted with the Chinese currency, but as Russia-China cooperation developed yuan has been increasing its role in the Russian financial market.

"Over the recent years, there have been more and more transactions in yuan. Moreover, the bank began cash transactions in yuan. In Russia, there are nearly 200 banks holding yuan-denominated correspondent accounts in Bank of China. Thus, the the bank provides more services to Russian customers via its partners," Gao Yan said.

Gold Yuan: Post-Dollar World Order Emerging in Eurasia
According to financial experts, traditionally used as a payment tool in joint Russia-Chinese trade and economic projects, yuan is now turning into a high-in-demand resource for Russian financial companies and investors.

The Russian Central Bank is also interested in the Chinese currency, in a bid to diversify its foreign currency reserves and reduce its dependence on the US dollar. In the fourth quarter of 2015 the Central Bank began holding assets in Chinese yuan.

According to the bank’s latest report, by March 31, 2016, yuan made up 0.1 percent of the bank’s foreign currency reserves.