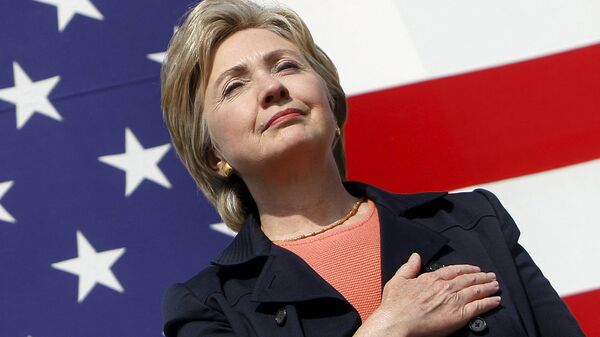 Pepe Escobar
All materials
Let’s cut to the chase; Hillary Clinton is ready to go to war against Russia in Syria – with inbuilt, potentially terrifying, thermonuclear consequences.

Anticipating an outcome of the US presidential election as a remix of the 1972 Nixon landslide, Hillary has also coined, George “Dubya” Bush-style, a remixed axis of evil: Russia, Iran and “the Assad regime”.

Clinton Claims Russian Aggression Keeps War in Syria Going On
That’s not even counting China, which, via “aggression” in the South China Sea, will also feature as a certified foe for the Founding Mother of the pivot to Asia.

And if all that was not worrying enough, Turkey now seems on the path to join the axis.

President Putin and President Erdogan met in Istanbul. Moscow positioned itself as ready to develop large-scale military-technical cooperation with Ankara.

That includes, of course, the $20 billion, Rosatom-built, four-reactor Akkuyu nuclear power plant. And the drive to “speed up the work” on Turkish Stream – which will de facto strengthen even more Russia’s position in the European gas market, bypassing Ukraine for good, while sealing Ankara’s position as a key East-West energy crossroads.

In addition, both Moscow and Ankara back UN Special Envoy for Syria Staffan de Mistura’s position that “moderate rebels” (the Beltway’s terminology) holding eastern Aleppo hostage must be eradicated.

The geopolitical game-changer is self-evident. As much as Erdogan may be a whirling political dervish, impossible to fathom and trust, while Putin is a master of the strategic long game, Moscow’s and Ankara’s interests tend to converge in the New Great Game; and that spells out closer integration in the dawn of the Eurasian Century.

Quite a cup of hemlock for Hillary Clinton, who has already equated Putin with Hitler.

In the appalling spectacle that turned out to be round two of the interminable Trump/Clinton cage match, Donald Trump once again made a rational point – expressing his wish for a normalized working relationship with Russia. Yet that is absolute anathema for the War Party, as in the neocon/neoliberalcon nebulae in the Beltway-Wall Street axis.

Flynn may have admitted on the record that ISIS/ISIL/Daesh’s progress was a “willful” decision taken by the Obama administration. Yet in his disjointed book Field of Fight, Flynn insists that, “the Russians haven't been very effective at fighting jihadis on their own territory”, are “in cahoots with the Iranians”, and “the great bulk of their efforts are aimed at the opponents of the Assad regime.”

This is a neocon mantra; unsurprisingly, the co-author of Flynn’s book is neocon Michael Ledeen.

From dodgy American Enterprise Institute (AEI) and Washington Institute for Near East Policy (WINEP) armchair “experts” to former counselors at the State Department, they all subscribe to the laughable view that the remixed axis of evil – now fully adopted by Hillary – is useless against jihadis; the good guys doing the difficult work are “the US-led coalition”. And damn those who dare criticizing the “relative moderates” backed by the CIA.

What Trump said is anathema not only for establishment Republicans who despise Obama for not fighting against the Hillary-adopted remixed axis of evil. The real mortal sin is that it “disregards” core US foreign policy bipartisan assumptions held to be as sacred as the Bible.

Thus the success of the neocon Ash Carter-led Pentagon in bombing the Kerry-Lavrov ceasefire deal which would imply coordinated airstrikes against both ISIS/ISIL/Daesh and the Front for the Conquest of Syria, formerly Jabhat al-Nusra, a.k.a. al-Qaeda in Syria.

Pentagon ‘Silent’ Coup Undermines US-Russia Engagement on Syria
Neocons and mainstream Republicans blame lame duck Team Obama for the “unholy reliance” on Russia and Iran, while neoliberalcons blame Russia outright. And high in the altar of righteousness, hysteria rules, with the neocon president of the NED calling for the US government to “summon the will” to pull a Putin regime change.

Hillary Clinton continues to insist the US is not at war with Islam. The US is de facto at war in Afghanistan, Iraq, Syria, Yemen, Somalia, Pakistan’s tribal areas; involved in covert war in Iran; and has totally destroyed Libya. It’s not hard to do the math.

'Afghan Scenario' to Unfold in Syria as US Halts Ceasefire Talks With Russia
In parallel, the deafening talk about Washington now advancing a Plan C in Syria is nonsense. There has never been a Plan C; only Plan A, which was to draw Russia into another Afghanistan. It did not work with the controlled demolition of Ukraine. And it will not work in Syria, as Moscow is willing to supply plenty of air and missile power but no boots on the ground of any consequence. That’s a matter for the Syrian Arab Army (SAA), Iran and its Shi’ite militias, and Hezbollah.

Ash Carter has threatened Russia with “consequences”. After blowing up the ceasefire, the Pentagon – supported by the Joint Chiefs of Staff — now is peddling “potential strikes” on Syria’s air force to “punish the regime” for what the Pentagon actually did; blow up the ceasefire. One can’t make this stuff up.

Major-General Igor Konashenkov, Russia’s Defense Ministry spokesman, sent a swift message to “our colleagues in Washington”; think twice if you believe you can get away with launching a “shadow” hot war against Russia. Russia will target any stealth/unidentified aircraft attacking Syrian government targets – and they will be shot down.

The only serious question then is whether an out of control Pentagon will force the Russian Air Force – false flag and otherwise — to knock out US Air Force fighter jets, and whether Moscow has the fire power to take out each and every one of them.

So in this three-month window representing the “death throes” of the Obama era, before the likely enthronization of the Queen of War, the question is whether the Pentagon will risk launching WWIII because “Aleppo is falling”.

Hillary, Queen of War: The Road Map Ahead
Afterwards, things are bound to get even more lethal. The US government is holding open a first-strike nuclear capacity against Russia. Hillary firmly supports it, as Trump made clear he “would not do first-strike”.

The prospect of having axis of evil practitioner Hillary Clinton with her fingers on the nuclear button must be seen as the most life-and-death issue in this whole circus.