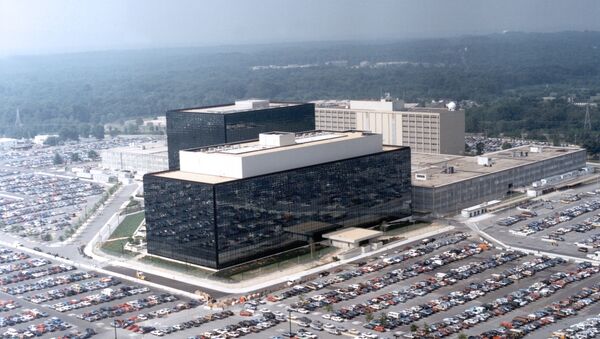 © NSA
Subscribe
It was revealed on Wednesday that the federal government recently arrested an NSA contractor who stole top secret documents relating to America’s surveillance activities. Radio Sputnik’s Loud & Clear spoke with whistleblower William Binney on whether the agency has a second Edward Snowden on its hands.

In recent months, the US National Security Agency claimed it had been hit by a series of a cyberattacks. Without providing any evidence, Washington resorted to the familiar tactic of blaming the hacks on Russia.

But William Binney, a whistleblower who left the NSA in 2001, always doubted this narrative, believing the evidence instead showed signs that an agency insider was responsible for the leaks.

"It appeared to me that because of the nature of the NSA network [that] it’s almost impossible to hack in. At least I don’t see how they could do it," Binney told Loud & Clear’s Brian Becker.

"So I assumed immediately that it was an insider."

It now seems he was proven correct, with the US Department of Justice confirming that 51-year-old contractor Harold Thomas Martin was arrested on suspicion of stealing highly classified source codes from the agency.

Those source codes allow the agency to pierce through weaknesses in private firewalls and spy on computer networks. While the NSA could help secure these vulnerabilities, doing so would put its own spying efforts at risk.

"The reason they have allowed these weaknesses to exist is one of the reasons why the OPM [US Office of Personnel Management] got hacked, [and] why you read about other hacks in the US," Binney says. "They’re not fixing the problems, and when you don’t fix the problems you’re leaving everybody vulnerable and exposed.

"They don’t fix it because they then have this window that they don’t want to close so they can look through…and see what people are doing."

The agency also cites these known cybersecurity weaknesses as an excuse to receive more federal funding.

"If you’re beating the drums of cybersecurity and you really want to do it, you fix the problems you know about. They don’t do that, [but] they leverage the weaknesses and the fact that people get hacked to drum up more support for more money," he says.

"It’s another way of fleecing the US public of money."

Given the wide reach of the NSA, Martin’s arrest raises doubt about other recent US "hacks," such as the leak of internal DNC emails earlier this year.

"It doesn’t have to be someone hacking in, it could be somebody like the NSA that already has all of their emails," Binney explains.

Ultimately, baseless accusations against the Russian government for internal leaks serves to feed the US military-industrial complex.

"People have an interest to create, for example, a Cold War with the Russians," he says. "What that means is more trillions of dollars invested in the Defense Department and military-industrial complex and the intelligence complex."

However Martin’s trial turns out, Binney doesn’t have much faith in America’s ability to treat its whistleblowers like Martin or Edward Snowden fairly.

"If you try to raise the issues internally with the government, like I did and others, they attack you. They try to put you in jail, they fabricate evidence against you. It’s really a criminal government we have now," Binney says.

"Until we get a government that’s going to be honest and democratic and follow the principles of the Constitution, there’s no way [Snowden] can come back."

After revealing the extent of the United States’ domestic surveillance apparatus in 2013, Snowden currently lives in exile in Moscow, where he was granted asylum by the Russian government.

000000
Popular comments
Business as usual ;-) Who know if it isn't a big BS born in a brain-amputated paranoia head. What they do is like somebody would carry all the garbage in the city to look for some banana-shells I dropped away. It's a say: " Oh Lord, large and great is Your garden and a lot of i*iots are housing in it..." :-)