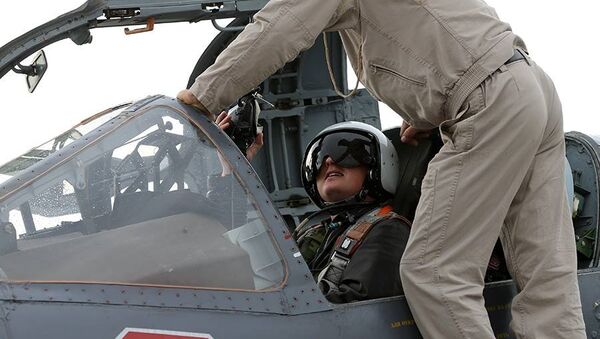 The Russian anti-terror operation in Syria is facing obstacles as the US-led coalition does not appear to be eager to help, Mais Krydee, the official representative of Syria's internal Hmeymim opposition group, told Sputnik.

MOSCOW (Sputnik) — Krydee’s statement comes as September 30 marks the one-year anniversary of the Russian anti-terrorist campaign in the country. It was launched at the request of Syrian President Bashar Assad.

"Russia helped the whole population of Syria, supported the status of the country and the very idea of being a country, and supported the law. Russia protected the establishment, as the country was about to fall down. I think most of the people in Syria are against terrorism, and they will say thanks to Russia one day. Many people understood it from the very beginning," Krydee said.

The United States and its allies have also been conducting airstrikes against terrorists in Syria. But the actions of the US-led coalition raise concerns, the representative of the internal opposition noted.

"The US-led coalition fight against terrorism is untrue and false, they themselves support terrorists, so we never trust them," Krydee said.

One Year On: What Russia Achieved in Syria in 12 Months
Moscow and Washington twice agreed on ceasefire in Syria, in February and September. However, the ceasefire did not hold and on September 26 the Syrian army declared its end, blaming militants for numerous violations that made the cessation of hostilities unreasonable. Russian Foreign Minister Sergey Lavrov said the same day that Russia could hardly trust the US-led coalition's actions against terrorist groups in Syria as it exclusively targeted Daesh and bypassed Jabhat Fatah al Sham (formerly known as al-Nusra Front).

"It is not easy to make the result now. When you have a partner who is not honest, you have a big obstacle. Russia has a very hard mission now, having a partner like the United States, who never really wants to stop terrorism. We have to be patient," Krydee said.

In March, Russian President Vladimir Putin made a decision to withdraw a major bulk of the Russian forces following successful fulfillment of their tasks in Syria. At the same time, Russia did not abandon its obligations to provide the Syrian government with weapons and military equipment, train military specialists. Hmeymim airbase and a naval facility in the port of Tartus remain operational while Russia's S-400 and Pantsir air defense systems continue to be on duty in Syria to protect Russian servicemen in the war-torn country.