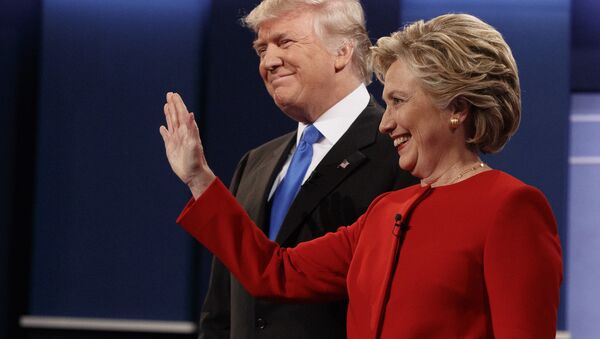 Republican presidential nominee Donald Trump traded ideas and rhetoric on competing views of the world at the first of the three debates at Hofstra University on Long Island near New York City.

WASHINGTON (Sputnik) — Trump took the offensive on economic policy at the start of the debate, repeating his vows to reduce taxes from around 35 percent to a maximum of 15 percent on US businesses. He also repeated his criticisms of the 1994 North American Free Trade Agreement (NAFTA) as being destructive for US industry and jobs.

Trump Focuses on Jobs, Unfair Trade Deals at Start of US Presidential Debates
Clinton countered that Trump’s tax reduction plan would put an additional $5 trillion on the US government’s debt and claimed her own economic plan would create 10 million new jobs.

Clinton also sought to defuse the growing concerns about the annual US $800 billion trade deficit with the rest of the world by saying she would appoint a special prosecutor to enforce free trade agreements.

However, Trump reminded Clinton that her plans include raising the tax burden on the American middle class.

The two also traded criticisms on personal issues when Clinton called on Trump to release his tax returns.

Trump said he would do so when the US Internal Revenue Service completed its audit of his businesses and he countered by saying he would still release them when Clinton released the 33,000 emails she had deleted from her private server during her years as secretary of state.

Trump also charged that the deletion of the emails by Clinton was done deliberately and not by accident.

Clinton wrote off the use of a private server as a "mistake" and also defended her health and stamina saying she had travelled to 112 countries during her years as secretary of state while Trump had not.

Trump Questions Clinton Stamina, Claims 'She Has Experience But it is Bad'
Trump warned that the United States was currently functioning in another economic bubble and he predicted that another serious economic crisis could begin as soon as current Federal Reserve Chair Janet Yellin increased interested rates by any significant degree.

Trump also charged that the United States had spent $6 trillion in the Middle East on policies of military intervention and nation-building supported by Clinton under Presidents George W. Bush and Barack Obama with nothing to show for them.

The money could and should have been used to rebuild the decaying domestic infrastructure of the United States, Trump charged.

"We've spent $6 trillion in the Middle East We could have rebuilt our country twice."

On racial issues Trump and Clinton agreed that major reforms were needed, but disagreed over what they should be.

United States Can No Longer Act as Policeman for the Planet - Donald Trump
The US government had to start by trying restoring trust between communities, especially those of racial minorities, and the police, Clinton insisted. She said Washington needed to implement a plan to address systematic racism in the domestic criminal justice system.

Clinton also said Trump should not be forgiven for his charge that President Obama had been born outside the United States and therefore had not been eligible to serve as president. She called the charge "racist."

Clinton also said the issue of cyber-threats would be one of the biggest to face the next US president and she claimed there was "no doubt" that Russia had used cyber-attacks against US organizations.

Clinton also accused Russia of "probing" US reactions to its alleged cyber-intrusions.

Nuclear Armament ‘Single Greatest Threat’ World Faces - Trump
Trump, however, countered Clinton had not proven that either Russia or any other state actor had carried out such intrusions, especially against the US Democratic National Committee (DNC). He noted the hacked DNC emails revealed that Democratic Party officials systematically favored Clinton over her challenger Senator Bernie Sanders.

On Middle East policy, Clinton expressed strong support for the Kurds and saying the United States must maintain its backing of them and its Arab partners against the Islamic State terrorist group.

Trump countered that Clinton deserved major responsibility for the rise of the Islamic State since she, as secretary of state, along with Obama, had implemented policies that left power vacuums in both Iraq and much of Syria, allowing the Islamic State to become established in the first place.

Trump Focuses on Jobs, Unfair Trade Deals at Start of US Presidential Debates
Trump stated that he was willing to continue working closely with traditional US allies, but he insisted they had to start carrying significant costs of their own defense since the United States could not carry the whole burden any more.

The United States "cannot be the policeman of the world" he said.

Clinton counter-attacked charging that Trump’s policies would encourage other major nations to develop their own nuclear deterrents and lead to a dangerous proliferation of nuclear weapons around the world.

"It has been the policy of the US to reduce the proliferation of nuclear weapons… His [Trump’s] cavalier attitude about nuclear weapons is so deeply troubling. that is the number one threat we face in the world," Clinton said.

Trump Vows to Release Tax Returns When Clinton Releases Deleted Emails
She said she would continue to honor the entire US global web of defense treaties.

Trump said that nuclear weapons and the threat of nuclear war, not global warming, was the greatest threat the American people and the human race faced.

Clinton emphasized her experience of government especially her four year as secretary of state. Trump admitted that she had accumulated experience, but he charged that it was "bad" experience.