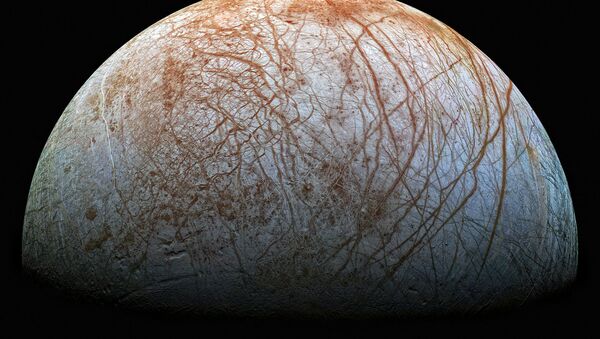 © Flickr / Stuart Rankin
Subscribe
During a highly-anticipated news conference on Monday, NASA announced it had captured images of what appear to be water vapor plumes on one of Jupiter’s moons. Is it evidence of a subterranean alien ocean?

Last week, NASA teased a major announcement about Europa, a moon of Jupiter, suggesting that "surprising activity" had been observed. Many were quick to speculate about the discovery of alien life, but the news, while not quite that big, is still exciting.

New images from the Hubble Space Telescope show what appear to be plumes of water vapor ejecting from the surface of Europa. This not only supports the widely-held belief that the moon is host to a vast ocean below a thick layer of surface ice, but that the study of that ocean could be easier than previously thought.

"Europa’s ocean is considered to be one of the most promising places that could potentially harbor life in the solar system," said Geoff Yoder, acting associate administrator for NASA’s Science Mission Directorate, according to an agency news release.

"These plumes, if they do indeed exist, may provide another way to sample Europa’s subsurface."

The images appear to show plumes rising roughly 125 miles above the moon’s surface. The Hubble team observed Europa on ten separate occasions as it transited Jupiter during a 15-month period.

Water could be seen erupting on three of those occasions. In theory, a future space probe could pass by Europa and retrieve a water sample from the plumes, saving engineers the complicated task of developing a drill capable of penetrating miles of ice.

While the existence of the plumes cannot yet be confirmed, it is looking increasingly likely.

"Hubble’s unique capabilities enabled it to capture these plumes, once again demonstrating Hubble’s ability to make observations it was never designed to make," said Paul Hertz, director of the Astrophysics Division at NASA, according to the statement.

"This observation opens up a world of possibilities, and we look forward to future missions – such as the James Webb Telescope – to follow up on this exciting discovery."

NASA isn’t the only group interested in Europa. The European Space Agency (ESA) also plans to launch its Jupiter Icy Moons Explorer (JUICE) mission, which will Callisto, Europa, and Ganymede, the largest of Jupiter’s 67 moons.

By combining NASA and ESA efforts, scientists could soon get to the bottom of Europa’s deep mysteries, and may uncover extraterrestrial life in the process.

000000
Popular comments
I thought Mars was the red planet !