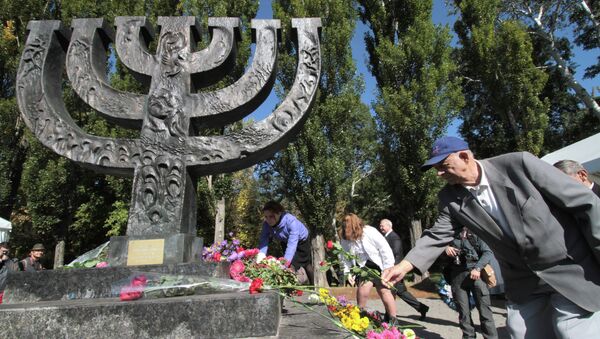 Department of Commerce Secretary Penny Pritzker has been chosen to lead a US delegation to mark a World War II massacre by Nazis and collaborators in Ukraine, the White House said in a press release.

WASHINGTON (Sputnik) — Babi Yar is a ravine in the Ukraine capital of Kiev where more than 33,000 Jews were slaughtered by the Nazis and Ukrainian collaborators on September 29-30, 1941. Many historians consider it the largest single massacre in the Holocaust.

"Secretary of Commerce Penny Pritzker has been designated by President Obama to lead a Presidential Delegation to Kiev, Ukraine, for the Commemoration of the 75th Anniversary of the Babi Yar Massacre on September 29," the release said on Tuesday.

During the visit, Pritzker will meet with Ukrainian leaders and legislators to discuss progress on the country’s economic reform agenda, according to the release.

Five executives from US companies will participate in the economic talks, the release noted.