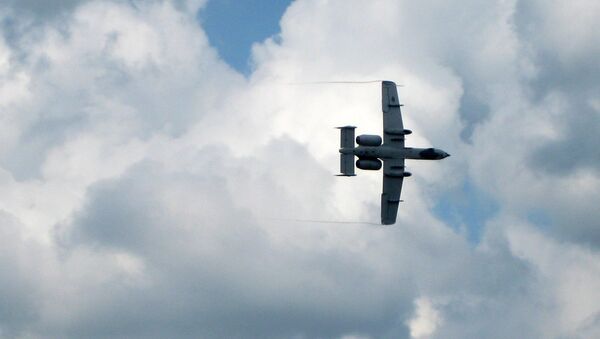 Commenting on Saturday's attack by US-led coalition fighter jets against Syrian army forces in the besieged city of Deir ez-Zor, respected Middle East expert Evgeny Satanovsky told Russian media that he couldn't help but get the feeling that the attack was no accident, but rather a consequence of Washington's incoherent Syria policy.

On September 17, two F-16 fighters and two A-10 ground attack aircraft launched airstrikes in the area of Deir ez-Zor, a government-controlled city in eastern Syria besieged by Daesh for nearly two years. The attack left over 60 Syrian servicemen dead, and wounded over 100 more. In response to the strike, the Syrian Army's High Command announced an end to the Russian and US sponsored ceasefire that stepped into force earlier this month.

US Airstrikes on Syrian Army are Nothing but Flagrant Violation of Ceasefire
On Wednesday, speaking before the UN Security Council, Russian Foreign Minister Sergei Lavrov offered support for Damascus, emphasizing that "the [US-led] coalition's airstrikes on the government forces in Deir ez-Zor on September 16 [were] a flagrant violation of the [agreement on the] cessation of hostilities."

Speaking to Russia's Vzglyad newspaper, Evgeny Satanovsky, respected Middle East expert and president of the Moscow-based Middle East Institute, warned that the situation in the country is quickly spinning out of control, with the US coalition and its 'moderate rebel' patrons sharing the lion's share of the blame.

"Over three hundred violations and attacks: Washington cannot or does not want to do anything here" (to correct the situation), the expert complained.

As for the attack on the Syrian army, "inflicted by the US, the British and the Danes, it shows either that the intelligence of the US and its partners is worthless," or that this is Washington's twisted interpretation of  the meaning of "demonstrating their commitment to the [ceasefire] agreement."

'Stab in the Back': What Awaits Syria After American 'Friendly' Fire
Satanovsky recalled that until Saturday's attack, the Syrian Army was living up to its side of the Russia and US-sponsored ceasefire agreement, withdrawing heavy weapons from their positions in Aleppo.

Blasting the US for its cynicism, the expert emphasized the obvious: that Moscow and Washington could not have reached an agreement on a ceasefire in Syria if it included a clause that the US would be allowed to attack Syrian government forces with impunity. Through Saturday's incident, "they immediately, defiantly and blatantly violated the agreement. This demonstration could not have been an accident."

Accordingly, the expert noted, the attack is likely a product of the long-running conflict between the US military and diplomatic establishment on Syria – an effort by the Pentagon to 'show the State Department who's boss'. "Such an attack could not take place without tacit approval from the White House," Satanovsky added.

This is far from the first time that the US has showed contradictions in its priorities for Syria, simultaneously supporting 'moderate rebels' and the Syrian Kurdish forces fighting them in the country's north.

Ultimately, Satanovsky suggested that he is now fully convinced that the sole purpose of the ceasefire agreement was to give the terrorists, particularly those in Aleppo and Idlib, a chance to regroup and resupply.

US Proxies in Syria Violated Ceasefire 'to Prolong War Until Clinton Presidency'
Prior to the ceasefire, the analyst recalled, the militant forces in Aleppo were completely surrounded and on the verge of complete annihilation. A portion of eastern Aleppo, Syria's second largest city before the war, is occupied by a ramshackle collection of militants, including forces from the Jabhat Fateh al-Sham, formerly known as Nusra Front. Analysts have repeatedly emphasized that Aleppo's complete liberation would bring the Syrian war close to an end.

"The course of events has shown that Washington is providing cover for the terrorists, and judging by events in Deir ez-Zor, not just those from Al-Qaeda, but from Daesh (ISIL/ISIS) as well," Satanovsky noted.

To ensure that such attacks are not repeated, the analyst suggested that Syrian Army units in Deir ez-Zor and Aleppo be equipped with Buk surface-to-air missile systems. "This will dramatically reduce anyone's desire to fly in these areas and to bomb Syrian positions," Satanovsky wryly commented.

As for Foreign Minister Lavrov's scathing remarks toward his American colleagues in New York, Satanovsky emphasized that whatever the Russian foreign minister might say, it's extremely unlikely to convince the US to live up to their side of the agreement.

The world, Satanovsky emphasized, is in "a situation of a Cold War, which is in full swing, whatever the diplomats might say…And the Americans are waging it," refusing to constrain themselves by any trifle such as a signed agreement.