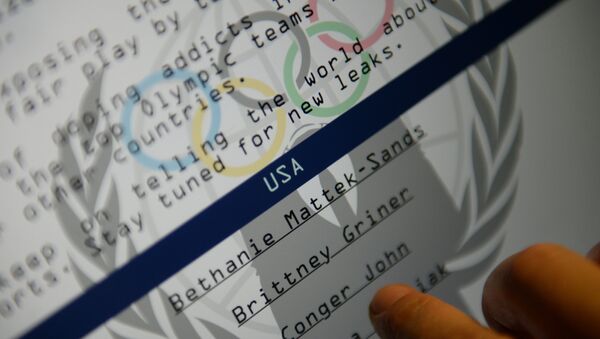 © Sputnik / Pavel Lisitsyn
/
Go to the photo bank
Subscribe
Hacking group Fancy Bear has released a third batch of documents from WADA about Western athletes allowed by WADA to use banned substances while denying Russians the use of mild acting meldonium. In an interview with Sputnik, André Hahn, a member of the German Parliament’s Sports Committee, said that WADA needed to change its rules.

#OpOlympics: Fancy Bears Releases 3rd Round in WADA Athlete Doping Exposé
“Even if the abovementioned athletes did not take banned substances, the information revealed by the hackers merits a serious probe. As for the fact that some Olympic champions and Tour de France winners are seriously ill and have to use drugs looks strange to me, to say the least,” André Hahn said.

Some of these substances allegedly included opiates, often prescribed for cancer patients. When asked how come such substances are prescribed to professional athletes, Hahn said that allowing athletes to use the so-called “agility” drugs was absolutely impermissible because they gave them a clear edge over others, especially with long-term use of stimulants.

“I believe that cases like these should be investigated and such practice be banned,” he added.

With each case of permissions requiring an official go-ahead by WADA, it looks like the agency could have intentionally given preferences to particular athletes at the expanse of all others.

World Anti-Doping Agency Completely Discredited, 'Reforms are Inevitable'
“I have always insisted that each case be should be thoroughly checked. I criticized the decision to ban the Russian athletes from the Olympics and the Paralympics because I believe that everyone should be treated equally and without any bias. We must not allow anything that could erode public faith in WADA and the national anti-doping agencies. The Left Party demands the presence of at least two independent experts to allow the use of prescription drugs by individual athletes, but, unfortunately, the parliamentary coalition of Christian Democrats and Social Democrats turned down this proposal,” André Hahn continued.

When asked whether the Williams sisters and some other athletes, should be deprived of their earlier-won titles or disqualified, Hahn said that this was not possible.

“I can’t imagine a situation when the Court of Arbitration for Sport changes the existing rules and decides to take away already won titles. We should look forward and make sure that violations like these never go unpunished again,” he emphasized.

The Russian athletes insist that they were not allowed to use drugs, which their American colleagues felt free to take. Moreover, the Russians were banned for using meldonium, while others were allowed to take much stronger substances.

Champions or Cheaters? American Olympians Allowed to Take Meth, Synthetic Opium
“I understand [the Russians’] feelings. We need rules that apply to everyone. It is absolutely impermissible for WADA to tell Russians not to use this or that substance, while letting others do exactly that. By the way, meldonium was fully legit only a year ago, while now it’s been put on the list of banned substances. We also know that its traces stay in the blood for a long period of time. Athletes who took it in 2015 were caught in 2016. I believe that in cases like this we need a certain transitional period to make sure that people are not disqualified for no reason,” André Hahn said in conclusion.

In July, a WADA commission presented a report in which Russia was accused of running a state-sponsored doping program. Russia maintains that the findings were falsified and has urged the West to keep politics out of sports.