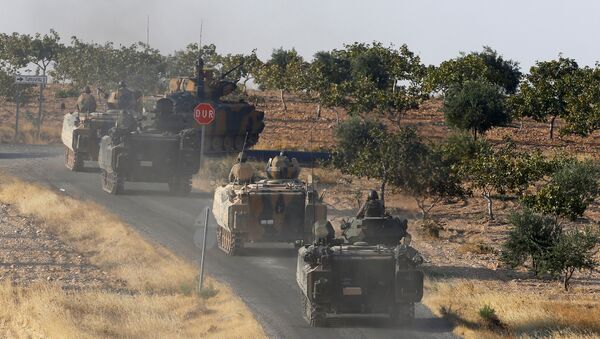 Turkey's "Euphrates Shield" operation may result in Ankara getting bogged down in northern Syria, experts warn, suggesting that by being sucked deeper into the region, the Turks could be subjected to attacks from various state and non-state actors on the ground.

"The FSA is expanding operations to al-Bab due to its geostrategic position between the cities of Manbij and Aleppo. Once the PKK's [Kurdistan Workers' Party] Syrian offshoot, the Democratic Union Party (PYD) seizes al-Bab, it will be able to connect its cantons in the West and the East and reach the Mediterranean. Seizing Al-Bab is vital for Turkey as well," Yunus Paksoy of Daily Sabah explained.

According to Turkish columnist Kadri Gursel, "the main determinant for Turkey's Operation Euphrates Shield in Syria… was not the threat posed by the Islamic State [Daesh]."

"Rather, it was the US support for the Kurdish Democratic Union Party (PYD), which Ankara sees as an offshoot of the Kurdistan Workers Party (PKK)," Gursel  stresses in his op-ed for Al-Monitor, adding that the prospect of a "Kurdish corridor" stretching from Afrin to Kobani has long been Ankara's nightmare.

Yury Zinin, a leading research fellow at the Moscow State Institute of International Relations (MGIMO), shares a similar stance, adding that Turkey is pursuing at least two goals in northern Syria. Ankara has to protect the FSA from Daesh and prevent the YPG from creating an independent entity on Turkey's doorstep.

180-Degree Turn in Russo-Turkish Relations Caught West by Surprise
However, citing international experts, Zinin notes in his article for New Eastern Outlook that the Turkish military operation would hardly be a walk in the park. The liberation of Jarablus does not mean that Daesh is giving up, he warns, adding that the Turkish Armed Forces have yet to face the challenge posed by numerous terrorist sleeper cells in the region.

Gursel echoes Zinin, suggesting that the Turks may get bogged down in northern Syria.

The Turkish journalist highlights that "the Euphrates Shield's main weakness is the shortcomings of the jihadi groups it has patched together under the Free Syrian Army (FSA) label."

According to Gursel, recent clashes between the FSA and Daesh in the town of al-Rai — halfway between Azaz and Jarablus — clearly indicated that the Syrian "opposition" can hardly advance without the Turkish army's support.

If sucked deeper into Syria, the Turks could ultimately confront the Syrian Arab Army backed by Russia, the YPG, Hezbollah and other non-state actors in the region, the journalist assumes.

Russia ‘Gravely Concerned’ About Turkish Advance in Syria
There is yet another challenge for the Turks in northern Syria: its double-edged alliance with the US.

Despite the fact that the US provided intelligence and military assistance to the Turks during the first stages of the Euphrates Shield operation, Washington has already signaled that it would not endorse Turkey's actions against the YPG-led Syrian Democratic Forces.

While Ankara sees no difference between the Kurdish militants and Daesh, the US still considers the YPG a capable force against Daesh on the ground and does not want to alienate the Syrian Kurds, "in a bid to strike a balance between Ankara's interests and Kurdish aspirations," Zinin remarks. 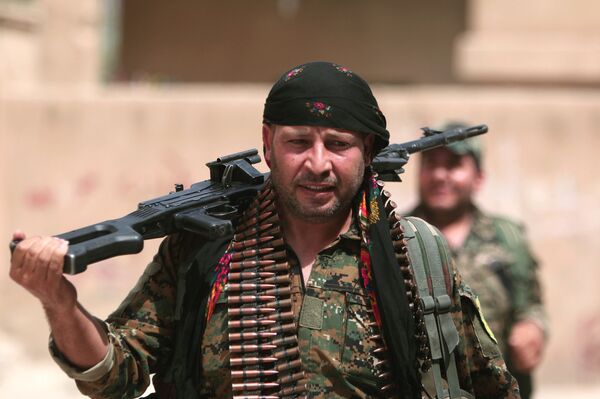 "Washington recognizes the fact that the Kurds are a great tool in the implementation of its strategy in Syria, but they cannot turn their back on old partners, and Kurds are well aware of this fact," he stresses.

For his part, Gursel insists that "the United States and Turkey have very different priorities in Syria."

"The priority of the United States is to degrade and destroy IS [Daesh], which makes the PYD not a problem but a solution. Turkey's priority, on the other hand, is to stop the PYD's expansion. So the United States cannot keep up the fight against IS relying on the Turkish military alone, for their underlying objectives diverge," the Turkish journalist elaborates.

Cracks Appear in the US-Turkish Coalition in Northern Syria
In light of this, the prospects of the US-Turkish joint operation against Daesh in Raqqa, announced by Turkish President Erdogan on Wednesday, as of yet look rather bleak.

According to Zinin, it still remains unclear whether Ankara's involvement in Syria is just a series of tactical steps aimed at tackling the country's security problems, which emerged after the attempted coup, or a fundamental shift in Turkey's foreign policy.

In his interview with Russian online newspaper Vzglyad, Boris Dolgov of the Institute of Oriental Studies of the Russian Academy of Science assumed that joint US-Turkish action on the ground in Syria means the de facto realization of Washington's "scenario," which is aimed at maintaining US control over the region.

It is worth mentioning that simultaneously Ankara has intensified its war against the Kurdish military groups in Turkey's eastern and southeastern provinces, as well as in northern Iraq, according to Daily Sabah.

That apparently means that US-Turkish contradictions over the Kurds may further deepen.