To Ban or Not to Ban: Burqa Has Become Political Issue in Europe 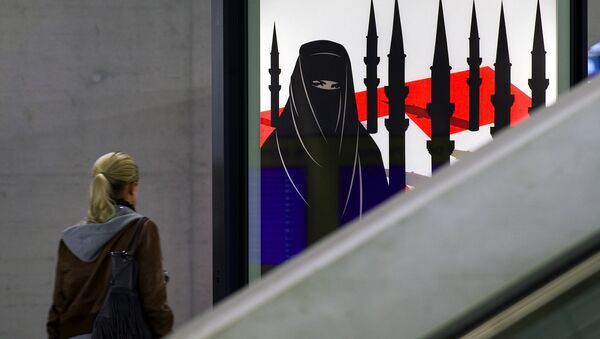 Radio Sputnik discussed the burqa, women’s right and freedom of choice with London-based political analyst and author of the book “Arabia's Rising: Under the Banner of the First Imam," Catherine Shakdam.

“The issue has become a political one because it is very easy to bank on terrorism and hatred politically. This is what is seen across Europe right now,” Shakdam said.

She further said that she personally does not understand the argument for the burqa because the headscarf is a requirement in Islam but the burqa is not an obligation in Islam and it is up to women to decide whether they want to wear it or not.

She further spoke about how the whole burqa issue has more to do with cultural choice than a religious one. According to her, it has been misunderstood by a lot of Europeans who think that it is religious obligation.

“It has been assumed that the burqa is an expression of Islam which it is not. It is a cultural choice and this needs to be highlighted because then it becomes a cultural argument and not a religious one,” Shakdam said.

She further spoke about how different communities need to talk to each other and understand one another in order to clarify such cultural misunderstandings which lead to hatred and isolation of minorities.

According to a survey published August 31, a majority of people in the UK are in favor of a ban on wearing the burqa.

A YouGov poll revealed that some 57 percent of the 1,668 adults participating in the poll in "the most tolerant" country in Europe support "a law that bans people from wearing the burqa in the UK."

Thirty-six percent of respondents strongly support the law while 10 percent were strongly opposed.

‘Most Tolerant’: Poll Reveals Most Brits Support Banning the Burqa
Among demographic groups, only 18-24 year-olds were against the ban. There is no significant difference in opinions between regions: 51 percent of Londoners and 63 percent of northerners approved the initiative.

Talking about this ban the analyst said that when it comes to integration, “We need to be very careful about the word and we need to make sure where we all stand otherwise we can’t talk about pluralism and integration,” Shakdam said.

She further spoke about how respect and being understood works both ways.

“When it comes to burqa, it is linked to Wahhabism and to a notion that women are objects and commodity and should be completely denied their identity. As a woman I of course don’t feel comfortable about this exceptionalism.”

She further said, “Telling women that they need to take off their clothes to express their love of democracy, I don’t agree with that and when it comes to Wahhabis telling women to make them invisible so that men can feel better about themselves, I disagree completely.”

The analyst said that women need to be empowered and be able to choose for themselves how they want to dress.

Discussions on banning certain Islamic clothes have recently become a matter of contentious debate in many European countries.