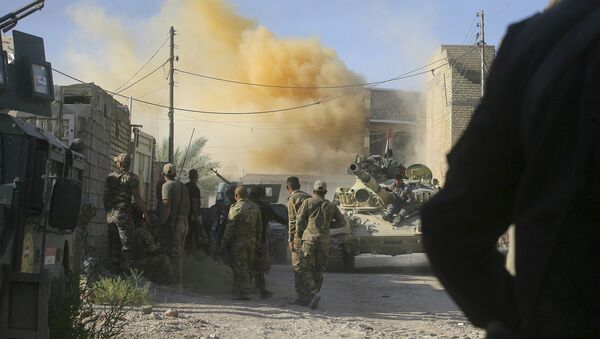 © AP Photo / Anmar Khalil
Subscribe
A new investigation revealed that far more people were killed, tortured and disappeared by Shia militants following the liberation of Fallujah than the US acknowledges. Radio Sputnik’s Loud & Clear spoke with journalist Raed Jarrar about issues that continue to plague Iraq and the reasons the US consistently skews reality.

"The way that the US portrays the conflict in Iraq is inaccurate," Jarrar began. "The story that we are told is that there is one bad guy in Iraq called ISIS and we’re stepping in to support our allies to get rid of that bad actor. But the reality is that Iraq has many bad actors, many sectarian militias, who are as bad as ISIS. We only happen to support some of them against others."

​Jarrar claimed that militias continued committing atrocities in Iraq long after Fallujah was liberated. "The Shiite militias accused of these violations have been accused of so many other violations over the last few years. Some of the violations are as bad as ISIS, some of them are worse because it’s state-sponsored, supported by the Iraqi government and the US as well." He stated that human rights violations committed by the militias include, "rape and beheadings and ethnic cleansing, forced disappearance (and) extrajudicial killings."

Loud & Clear host Brian Becker asked, "Do any of the Shiite based militias have a nationalist, as opposed to a completely sectarian, outlook?"

Jarrar broke down the complexities of group dynamics in Iraq and gave historical context to the current environment, saying, "With the fall of Baghdad there were a few major splits that came to the surface and I argued for years that the main split in Iraq was not a sectarian or ethnic one, the main split is more political and economic." He said, "Towards the beginning of the conflict in 2003, nationalist groups such as the Sadrist in the South of Iraq [formed]. They’re against dividing Iraq into regional enclaves based on ethnic background. On the other side there are sectarian and ethnic separatist groups who mostly control the iraqi government and they have similar political and economic agendas."

He claimed that the American public is largely unaware of how complicated the situation is in Iraq because the US perspective tends to be more about self-interest than justice abroad.

"The mainstream narrative in the US is that there are bulks of sectarian-based militias, with the assumption that all Sunnis work together or all Shias work together and I don’t think that’s the reality of the matter. I think it’s much more nuanced. There are many Shiites who are critical of US and Iranian intervention and there are Sunnis who are critical of US and Iranian intervention, but we don’t hear about them much in the US because it doesn’t fit the US government’s narrative about Iraq, why we’re there and why we continue to be there and why our presence in Iraq is justified."

000000
Popular comments
The purpose of Washingtons occupation and subsequent presence in Iraq and elsewhere around "israel" was and IS intended to create chaos and sectarianism. Take and remove the frankenstein monster implant " israel" and they would get along just fine.