'We Are Not a Threat': France Blacklists 'Politically Suspect' Teachers 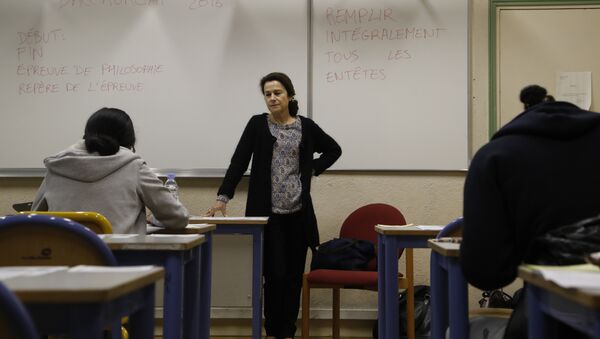 © AFP 2021 / FRANCOIS GUILLOT
Subscribe
Teachers put on the so-called “S-list” on suspicion of links to terrorists have been suspended, French Education Minister Najat Vallaud-Belkacem said. Sputnik discussed the situation with Gérald Arboit, a senior researcher at the Center for Studies of Intelligence Activities - CF2R), and with one of the blacklisted teachers.

Gérald Arboit said that the S-list was a mishmash of Islamists, suspected terrorists, street thugs and members of various sects who allegedly pose a threat to public order and state security.

”The S-list is changing all the time, because you are  normally listed for six months and then, if no incriminating information has been found on you, your name is struck off the list,” he said.

France's Burkini Ban Overturned as Suits Pose No Risk to Peace, Order - Court
Those put on the list do not know about it, but police and security organizations know, which means that these “suspects” can be put under surveillance or simply arrested.

Gérald Arboit described the Education Minister’s decision to suspend all teachers put on the list as a slap in the face of the country’s teaching community.

In an interview with Sputnik a man who insisted that his name not be mentioned, said that after he had been arrested five or six times and subjected to interrogations each time he crossed the border and asked to explain the reason of his leaving or entering the country, he started analyzing the questions police officers were putting to people like him.

“Some of them flatly refused to talk to me, but many admitted that putting people like me on the S-list simply made no sense,” he said.

Mentioning Najat Vallaud-Belkacem’s decision to suspend all teachers featured on the S-list, he said that apart from Islamists, it also featured a dozen other categories of “suspects” — from extreme right-wingers to radical left-wingers and other “dissidents”.

“Someone who is considered a threat to the state does not necessarily pose a threat to the children under his care. We are not a threat to anyone and being on the S-list does not mean that you deserve to be there,” he emphasized.

France has been on high security alert since last November’s attacks in Paris, which killed 130 people. The state of emergency was extended for six months in July after a truck attack in Nice claimed 84 lives.

The Interior Ministry has vowed to utilize all legal means at its disposal to fight terrorism. It said it had expelled 82 people since 2012.

000000
Popular comments
Mentioning Najat Vallaud-Belkacem’s decision to suspend all teachers featured on the S-list, he said that apart from Islamists, it also featured a dozen other categories of “suspects” — from extreme right-wingers to radical left-wingers and other “dissidents”. -- The globalists also test war weapons in the same way, first on "terrorists", then on the civilian population. It's all part of the centralization of global power that James Corbet and other s talk about. But James and I go in completely different directions when he goes all the way to anarchy.
jas
27 August 2016, 10:35 GMT2
000000
The french "bien-pensance" strikes again.. my country is ruled by corrupted people (well all the west).