Victorious on the Battlefield, Iraqi Army Losing Out to Corruption 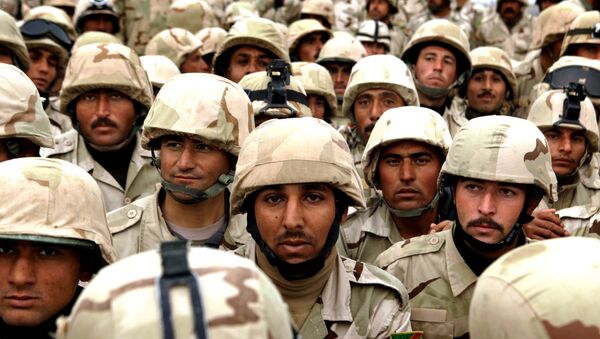 © AP Photo / Maya Alleruzzo
Subscribe
International
India
Africa
The Iraqi army has dislodged Daesh militants from al-Qayyara city located south of Mosul and is now poised to capture the terrorists’ de-facto capital in Iraq, Izvestia wrote citing an Iraqi Foreign Ministry spokesman in Baghdad. However, there is a big problem it is now facing in the "corridors of power" in Baghdad.

“The victory in Al-Qayyara is an important step on the road to Mosul. The terrorists had been using it as a logistic center. Our security forces are now demining the city and restoring buildings and roads there,” Ahmed Jamal told the newspaper.

Moving Out: Daesh Removing Computers, Documents From Iraq's Mosul Amid Strikes
He said that planning the operation to capture Mosul would take some time because the terrorists were certain to use the local civilian population as human shields, so it was imperative to avoid civilian casualties.

According to the head of Iraq’s counterterrorism agency, Abdel Ghani al-Asadi, an estimated 250 Daesh fighters were killed during the operation to capture Al-Qayyara.

The Iraqi armed forces earlier managed to retake a nearby military airfield that will be used in airstrikes on Daesh positions in Mosul.

Meanwhile, ignoring the country’s military gains on the battlefield, the parliament has passed a vote of no-confidence against Defense Minister Khalid al-Obeidi, who has been repeatedly accused of corruption.

“Al-Obeidi’s resignation came as a shock to the Iraqi people and is a shining victory for corrupt officials,” Muatazz Mouhi Abdel Khamid, director of Iraq’s Republican Center for Strategic and Security Studies, told Izvestia.

“The decision took many of us by surprise. Khalid al-Obeidi is an outstanding commander who led a number of major operations against militants.

Besides, he was trying to root out corruption in the army ranks and this is obviously why he was ousted by bribe-takers in parliament enriching themselves on illegal arms deals,” Muatazz Mouhi Abdel Hamid said.

He added that with the recent resignation of Interior Minister Mohammed Salem al-Ghabban the country’s law enforcement will no longer be able to effectively deal with the terrorist threat.

Iraqi forces are carrying out operations in the Nineveh governorate in preparation for an assault on Mosul, Iraq's second-largest city that has been under Daesh control since 2014.

On June 26, the Iraqi army announced the liberation of Fallujah from Daesh, while Prime Minister Haider Abadi vowed to raise the country's flag in Mosul.

Daesh, which is a militant jihadist group outlawed in many countries, including Russia, overran large parts of Syria and Iraq in 2014 amid the ongoing civil war in Syria.