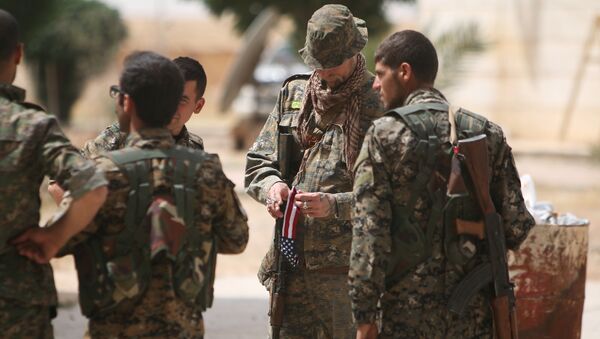 © REUTERS / Rodi Said
Subscribe
International
India
Africa
Although the Syrian Democratic Forces (SDF) have recently pledged to retake Raqqa in the near future, the task is actually not as easy as it seems: sectarian concerns and conflicts of interests may upset the ambitious plan.

The US has no real allied forces on the ground in Syria to take Raqqa, Daesh's (ISIS/ISIL) stronghold, no matter how much air support the coalition would provide, according to John Ford, a reserve Captain in the US Army.

"This is the glaring hole in America's anti-ISIL strategy. The United States has allies on the ground in Iraq who can take territory from ISIL [Daesh] and hold it but their progress will stop at the border. The Iraqi Army isn't going to invade Syria and the United States has no allies in Syria who can seriously threaten Raqqa," Ford writes in his opinion piece for The National Interest.

Turkey Launches Military Operation on Liberation of Syrian Jarablus - Reports
The captain calls attention to the fact that inside Syria the US has long been backing the Syrian Democratic Forces (SDF) which comprises predominantly Kurdish militants.

The Kurdish People's Protection Units (YPG) now controls vast territories in northern Syria, along the Turkish border. Regardless of the fact they have been proven to be capable fighters, they are "not well positioned to lead the fight to take Raqqa," according to Ford.

Remarkably, the US-led anti-Daesh coalition signaled Thursday that the SDF is moving east across the Euphrates and preparing to liberate Raqqa. Earlier the SDF forces retook the Syrian town of Manbij from Daesh.

However, in the context of Ford's narrative the pledge to liberate Raqqa may turn into a hot air.

On the one hand, "it is far from clear that [the YPG], for all their battlefield successes, have the logistical capability to support the kind of ambitious offensive operation that would be required to take Raqqa," the captain notes highlighting that in fact the Kurds do not have appetite to fighting for the Daesh stronghold.

"The Kurds, who make up the bulk of the force [SDF] and nearly all its top commanders, are keener on capturing the towns on the west of the Euphrates river to link the Kurdish-held territories of Kobane and Afrin," the Arab Weekly reported in mid-June.

Turkey Chose 'Opportune Time' to Launch Ground Operation in Syria
The problem has been exacerbated by the fact that Ankara has recently stepped in in Syria pursuing at least two goals: to defeat Daesh and to prevent the YPG from spreading beyond the eastern bank of Euphrates.

To add insult to injury, US Vice President Joseph Biden has made it clear to Syrian Kurds that they must return to east of the Euphrates, leaving their positions in the west, most notably Manbij, to retain the US support, Reuters reported Wednesday.

Speaking to RT, Middle East affairs expert Ali Rizk underscored that the recent developments show that America would not "prioritize protecting the Syrian Kurds over maintaining its alliance with Turkey."

"Evidence of the importance the US attaches to Turkey is the fact that the US dispatched not John Kerry, for example, to go to Ankara, but the Vice President himself, Joe Biden. I think that by itself shows the importance and the keenness of America to keep Turkey on its side," Rizk underscored.

Apparently, this would not add enthusiasm to the YPG's fighting against Daesh.

On the other hand, Ford continues, "even if the YPG were ready to move on Raqqa, sending Kurdish troops to take the Arab city might give a communal character to the fight, causing Arabs in eastern Syria to rally to the ISIL [Daesh] banner."

Syrian Democratic Forces Moving East for 'Eventual Liberation of Raqqa'
The captain also draws attention to simmering tensions between the YPG and Arab rebel groups like the Free Syrian Army (FSA). He recalls that back in 2013 the YPG and FSA "ended up fighting each other for control of the northern city of Ras al-Ayn."

At the same time, FSA has even lesser chance to retake Raqqa from Daesh, he notes.

"The FSA have no significant forces or holding in eastern Syria, with their main area of strength now in the northwest around Idlib," the captain clarifies.

As of yet Washington has faced "the harsh reality that it has no allied forces on the ground in Syria that are obvious candidates to take the ISIL capital, no matter how much air support the coalition can provide," Ford concludes.