UN Mission in Haiti: Cholera Outbreak One of Many Crimes 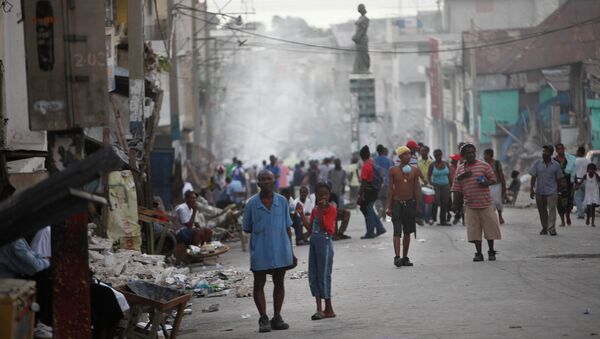 © AP Photo / Gerald Herbert
Subscribe
International
India
Africa
UN Secretary General Ban Ki-Moon has admitted that the organization bears some of the responsibility for the 2010 cholera outbreak in Haiti that killed 10,000. Radio Sputnik discusses with Sienne Merope-Syngeof of the Institute for Justice & Democracy and writer Kim Ives what abuses the UN is responsible for in the Caribbean island nation-state.
https://www.spreaker.com/user/radiosputnik/uns-role-in-cholera-outbreak-just-the-la

Ban Ki-Moon’s address came in the wake of an internal report from the organization obtained by the New York Times that found the cholera outbreak “would not have broken out but for the actions of the United Nations.” UN leadership fell short of admitting responsibility for the disaster.

Haiti Crisis: Another Example of US ‘Empire’ Undermining Progress Abroad
Talking to Loud & Clear’s Brian Becker, Ives said that the core question to ask is how the UN could allow “the sewage of its troops to flow into water of the Haiti’s biggest river, sparking the largest outbreak of cholera in the world, and then act as if they had no role in it.”

According to Merope-Synge, citing watchdog reports, UN peacekeepers were dumping sewage waste into rivers that supply drinking water at least until 2014, four years after the beginning of the outbreak.

“There was absolute systematic disregard for the most basic standards of sanitation. This continued for years following the initial cholera outbreak,” she said. “This demonstrates systematic disregard for Haitian lives, frankly, and the inability to reform and take this problem seriously, from the field level in Haiti all the way up the UN, including the UN Secretary General.”

'The People Are Just Fed Up': Haiti on Brink of Bloody Revolution
Ives added that, despite the NY Times report, the “US Appeals Court upheld the immunity of the UN from the claim that was brought [to court] by 5,000 cholera victims,” suggesting that the organization will face no sanction or punishment for their actions.

The apparent organizational negligence outlined in multiple reports on the cholera outbreak has its roots in the role that the UN played in contemporary Haitian history, according to analysts.

The country has been subject to a string of US-orchestrated coups. In 1996, Democratic Nationalist Jean-Bertrand Aristide was legitimately elected president, but was toppled within eight months by a coup, Ives said, adding that Aristide came to power again in 2001, and was overthrown again three years later, in “another US –backed coup.”

“After the first coup they put in US forces to occupy the country, which then was passed off to the UN to act as a sort of a proxy,” Ives said, adding that UN forces were pulled out of the state in 2000, and brought back when Aristide was re-elected in 2004.

“They were supposed to come for just six months. But here we are – twelve years later, and the UN forces are still there. They are essentially there to keep down Haitian people and act in place of the Haitian army that used to govern the country.”

Aside from the cholera outbreak, the UN is charged with other violations, Merope-Synge said, quoting reports from Doctors without Borders in which UN peacekeepers “consistently violated human rights” in poor neighborhoods, including anti-gang operations resulting in many deaths, and sexually abusing civilians, including minors.

2 UN Police Officers Found Dead in Haiti
To repair the damage they have done in Haiti, Merope-Synge said, international organizations including the UN must ameliorate the aftermath of the cholera outbreak, invest money in water sanitation and “reset Haitian human rights, including their right for self-determination and their right for elections.”

Haiti is looking forward to its October 2016 elections, both analysts agreed.

“This will be the moment of truth: Can Haitian people get back their sovereignty and hold elections that are not intervened with by the UN?”

The upcoming presidential election in the US, “will be not good news” for Haiti, regardless of the local outcome, Ives said.

“Neither Trump nor Clinton, is concerned with the Haitian problem,” he said. “Clinton played the terrible role in Haiti, leading a so-called rebuilding effort in 2010. Hillary Clinton’s centerpiece was to build a sweatshop in the north of Haiti, which is not going very well.”