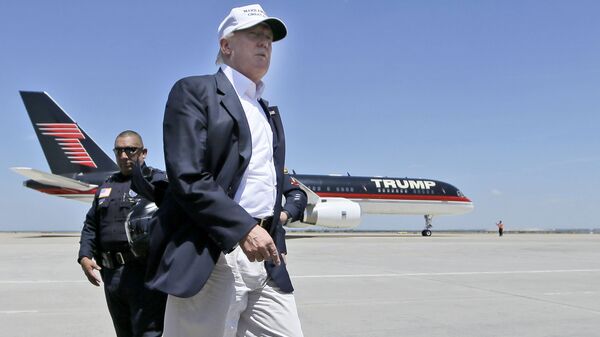 © AP Photo / LM Otero
Subscribe
International
India
Africa
Although polls show that Hillary Clinton is currently leading Donald Trump in a number of key battle ground states, it does not mean that Trump's campaign is doomed. His latest campaign shake-up indicates that the Republican presidential nominee is determined to win.

Trouble Brewing: Real Threats Clinton Camp Prefers Not to Talk About
Although the US mainstream media is asserting its audience that Republican presidential candidate Donald Trump has given up and is merely unable to win, facts on the ground prove otherwise.

"Given his personality type, I think he is exhibiting signs of intense frustration that comes from the diminishing amounts of undeserved adulation he received during his primary run. And that may very well lead him to simply take his ball and go home," CNBC's senior analyst Ron Insana believes.

However, according to Peter Navarro, a professor at the University of California-Irvine and a senior policy advisor to the Trump campaign, the situation is not as dire as it seems to some media pundits.

Navarro draws attention to the fact that political analysts have repeatedly underestimated and miscalculated Trump's moves in the course of the presidential campaign. Likewise, today, they have rushed to declare Hillary Clinton the likely winner of the 2016 presidential race.

"The question, of course, is whether these elites will finally get it right and turn Trump into an embarrassing historical footnote-or once again be spectacularly wrong. The answer will inevitably hinge on whether each of these 'Seven Pillars of Beltway Wisdom' turn out to be on point-or wildly off the mark," the US academic notes in his article for The National Interest.

Could Deep Dissatisfaction in the US Political System Lead to a Trump Victory?
First, national polls show that Hillary Clinton is currently leading Donald Trump in some "key battleground states."

However, Navarro notes, that Trump still has strong positions in traditional "red" states. Furthermore, he may redraw some "blue" states into "red" due to his "independent-friendly and likely centrist" agenda.

The second misconception is that Hispanics will prefer Clinton to Trump, because she propagates "open borders" while her opponent wants to build a "big beautiful wall" between the US and Mexico.

Since Trump's message for Hispanic voters is that he wants not only to create new jobs for them but also to prevent illegals from taking their jobs (thus driving down their wages), he stands a good chance of winning their hearts and minds, he notes. 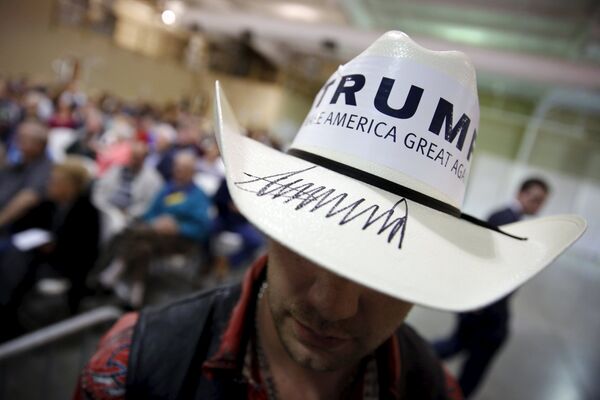 Third, similarly, those who believe that Hillary Clinton will command the "black vote" could be mistaken, the US scholar remarks. President Obama and Democrats have failed to improve the living standards of the African-American community.

"Trump will bluntly ask black (and brown) Americans whether they are more interested in more welfare checks and food stamps, which Hillary Clinton will happily supply, or whether they want the kind of job opportunities and rising wages a Trump presidency will offer," Navarro stresses.

Trump: 'A Vote for Clinton is Also a Vote for TPP Betrayal'
Likewise, it is not written on the wall that Big Labor and women will more willingly vote for Hillary Clinton rather than for her opponent, he adds.

The American academic stresses that Big Labor remembers that it was the Clintons who championed the North American Free Trade Agreement (NAFTA) in 1993 as well as a 2012 South Korean trade pact which, according to labor unionists, destroyed tens of thousands of American jobs.

Moreover, there is little if any doubt Hillary Clinton will continue to push ahead with the Trans-Pacific Partnership (TPP), which triggers Big Labor's deepest concerns.

Navarro debunks yet another myth, which says that Trump's opposition in GOP will eventually "sink" him, referring to the fact that the presidential nominee's Republican opponents constitute a small faction within the party.

Finally, one of the biggest mistakes of both the political elites and Trump's opponents, according to the US academic, is that they believe that his tough rhetoric was costing him votes.

"After all, much of Trump's popularity stems from his willingness to say what he thinks, even (or especially) if it offends the politically correct," Navarro recalls, adding that "if Trump simply stays focused on his four aces of the economy, trade, immigration and national security, it is equally true that he will surely play a winning hand."

Trump Leads Clinton by 10 Points Among US Military Households - Poll
For her part, Kelly Riddell of the Washington Times denounced the mainstream media narrative that Donald Trump may surrender before the November election as "absurd," stressing that there are clear signs that Donald Trump is determined to win.

"Mr. Trump has surprised this entire election season, and there's no reason to think he can't do it again, no matter what the polls say today," Riddell emphasized.

"I believe we're adding some of the best talents in politics, with the experience and expertise needed to defeat Hillary Clinton in November and continue to share my message and vision to make America great again," Trump said in his official announcement, as quoted by Politico.com.